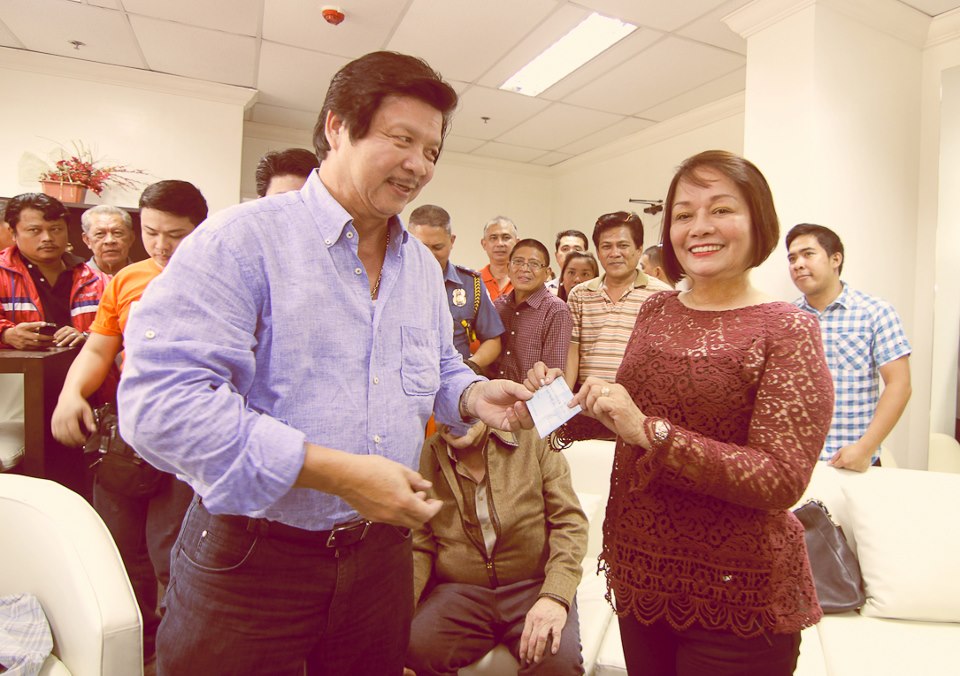 After two decades, we have seemingly outgrown our juvenile fascination with entertainment celebrities. We barred the likes of Tito Sotto and Lito Lapid from the Senate and Makati City Hall, respectively. Goma and Machete are sulking with their trophy wives. It looks like Bong Revilla and Jinggoy Estrada are revving up their public relations machines towards 2010.

There’s an unwritten rule in the Senate where it says that the first 3 years of a 6-year termer, all 12 of them, should defer to the last 12 on their last 3-year term. Expect therefore the company of the new senators, i.e., Chiz, et al. to play audience to their colleagues who were elected in 2004 and are now gunning for reelection, or some other positions, in 2010.

Right now, we are struggling to cast out the demons of dynasties.

There’s an interesting dynasty in Valenzuela City made up not by an ascendant-descendant but by siblings. The dynasty is fueled by sheer logistics. Now that its members have captured the territory: Sherwin, 36, is the City Mayor, Rexlon, 32, is its congressman, while another younger sibling is a city councilman. They are now into public relations where they project the dynasts as highly qualified and better trained than their contemporaries shoved by their parents into public office.

Since they are now well-entrenched, they have changed gears of fund sourcing: from their petty cash to the public cash. The LGU has an annual budget of close to P2B.

Unlike the run-of-the-mills Quezon and Mindanao dynasties, for instance, the Valenzuela fiefdom is composed of Ivy Leagues’ alumni. The congressman however was quoted as saying, “an anti-dynasty bill is a regressive bill. It discriminates … How would you feel if you and your brother both want to write but because you’re already a writer people would tell your brother he could no longer do so?” The comparison made betrays a tapered mind, if not a slick one, figuring a good out. An anti-dynasty bill regulates behavior not profession.

Undoubtedly, its patriarch William Gatchalian, has a long term agenda. He has grown tired of being a political contributor and gofer to Presidents. Tales abound where he spends nights in Malacanang humoring Erap. “Napupuyat ako, ika” WG was often heard saying.

Of course, there’s that Chinese-slant dictum of “kailangan ka lang kapag may kailangan” frequently mouthed by the likes of Erap. The Chinese are notorious for being fair-weather friends. They treat friendship as part of the Financial Statement. There’s that chapter in our running cultural history where Chinese parents named their children after the latter’s godparents. Erap, since his mayorship knew the art of squeezing Chinese businessmen. He knows that these Chinese traders, being tax evaders, gravitate with politicians, or whoever is in power. The bigger the name, the better. Lucio Tan attached himself with Marcos. It was Marcos himself, assisted by the late Ruben Ancheta, the BIR Commissioner, who was the tax consultant of the Kapitan. If the tax schemes of Marcos were not perfect, Tan would have been in the freezer a long time ago.

The PCGG has the complete roster of Chinese merchants that paid retainers to the Malacanang tenant. During martial law, these Chinese entrepreneurs glued themselves with generals. There was that infamous military agency, the Office of Civil Relations, invented by Marcos ran by generals, then colonels, and during its dying days, by PFCs, that assumed parallel judicial power with inferior courts. It was a hit among the military top brass. Generals then became instant millionaires antedating the now languishing in jail, AFP Comptroller General Garcia. Chinese respondents were haled before this extortion chamber under the guise of mediation. For a time, the luster and respectability of the Courts were lost. The legal profession was relegated to the background. Enrollment in law school dropped to the lowest of the low, while applications at the Philippine Military Academy, and of course military recruitment, shot up. Professionals made a beeline to the equivalent of the Human Resource Department of the AFP filling up and filing their resumes. Instantly, degree-holders became First Lieutenants and sported short and long fire-arms. Under the military plantilla, a great number with mental problems were admitted and sowed terror among the civilians. The favorite target was the Chinese community.

Everybody was hailing the genius of the creator of the OCR. This was right after the public execution of Lim Seng, an alleged drug manufacturer.

William Gatchalian has grown tired of being exploited. His days of being harassed by the Office of the Mayor and the taxmen are over. His Supreme Court case where he salvaged his citizenship by the skin of his hairpiece cost him millions of pesos. In 1998, he was one of the biggest plunkers in Erap’s billion peso war chest. He was rewarded handsomely. In an August 2, 1999 Business Asia report, WG was hailed as a businessman who had what it took to be successful:

Shares of tycoon William Gatchalian’s holding firm Wellex Industries have surged on reports that he is looking into buying more hotels and putting up casinos in the Philippines.

Hotel firm Waterfront Philippines, in which Gatchalian has a 40 per cent stake, rose 1.09 per cent to 4.65 pesos and was one of the most actively traded issues with about 91 million pesos in trades.

“Waterfront is also with casinos and hotels. There’s been reports that Gatchalian is looking into acquiring more hotels and putting up casinos in there,” said Jose Ma Ricardo Garcia, executive vice-president at Diversified Securities.

Traders said Gatchalian, said to be a close friend of President Joseph Estrada, was not likely to encounter opposition against his gaming ventures.

“He’s basically a guy who has re-invented himself into a casino, gaming, hotel and leisure resorts tycoon,” one trader said.

Wellex also has a majority stake in Air Philippines, one of the Country’s new airlines.

“What you’re having is basically a lot of things with synergy,” the trader said.

Manila newspapers reported recently that Gatchalian was planning to acquire hotels that would add to Waterfront’s current line-up of two casino hotels in Cebu, central Philippines.

A former Erap Executive Secretary named WG as a regular habitué of Erap midnight cabinet. WG looked forward to reaping a hefty ROI on his political investment. He was cut short by EDSA 2. Not only that. In the ensuing frenzy of the revolution, WG was painted as a sycophant. In the Jose Velarde impeachment case, the posterity records tell us that Erap made a triangular arrangement with Jaime Dichaves and Willliam Gatchalian. WG was borrowing money from Dichaves. To insure repayment, Erap and Dichaves opened the Velarde account where the P500M loan to WG came from. This kunyari or palabasin natin, ganito scenario made WG a bumbling stooge of the president. WG did not refute on record that version of Erap in the Sandiganbayan trial for Plunder. Erap got the reputation, unlike Marcos and FVR, of maintaining useful idiots who could not cover themselves up. Erap’s lawyer, Atty. Edward Serapio, an Ateneo Law graduate and bar topnotcher languishes in jail together with his client. At least, Erap ponders, he has a very loyal consigliore.

While Danding and Lucio Tan cozied up to President Marcos, their investments remain intact today. WG’s association however with Erap gave him an up close and personal look at the presidency and its quest. He knows that any pretender must be fully gassed up.

WG wants a new tact. Why not target Malacanang himself. His issues are not mono-syllabically surnamed. Gatchalian sounds and looks very Filipino, unlike Poe of FPJ or Lim of General Fred. He has that Supreme Court decision that says he is a Filipino. Since he has that citizenship, his hotshot children are all natural born. He knows that this is a plus factor in the 2016 or 2022 presidential elections. His eldest son, the Valenzuela Hizzoner, is only 36 years old. In future presidential elections this dynasty shall figure prominently trying to catch the nation’s attention, the patriarch muses.

WG is in the process of reinventing himself again. Not only would he be a trader with a yen on the best investment bets but a kingmaker as well of any one of his own brilliant sons.

Where to get the campaign logistics? WG owns Wellex Petroleum Corp., and oil exploration and mining firm. “As of 1996, the mineral reserves of the Philippines were comprised of 6.67 billion metric tons of metallic and 78.472 metric tons of non-metallic minerals. A large part of the metallic reserves is copper (70%) followed by nickel (16%). A study conducted by East-West Center in 1994 estimated that about 11 new deposits under a “conservative estimate” and 25 deposits under a “most likely estimate” might be developed during the period 1995-2015,” says an online disclosure of the Philippine Embassy in the United States.

OIL EXPLORATION and mining firm Wellex Petroleum Corp. said it has signed a partnership with a subsidiary of China Petroleum and Chemical Corp. (Sinopec), one of China’s biggest oil companies, to venture into oil and mining activities in the Philippines.

Wesley Gatchalian, director and executive vice president of Wellex Petroleum, told the Philippine Daily Inquirer that Southern PEC Petrochemical, a subsidiary of Sinopec based in Guangdong province in China, has signed a memorandum of understanding with the Wellex Group to bid for the government’s oil concessions in Palawan and Mindoro.

The bid was submitted to the Department of Energy about two months ago. The winner has yet to be named.

Gatchalian added that Wellex planned to form a joint venture firm with its Chinese partner to go into mining exploration possibly for nickel, copper, manganese, coal and chromite. Both partners are currently in the process of applying for exploration permits in possible mine sites such as Palawan and Samar.

“The Wellex Group is positive this will help our economy because Sinopec is a large company. The mining industry is booming. Wellex Petroleum is mandated to look for mining and oil sites or high-growth investment areas. We are very happy that Wellex Petroleum will push forward with the partner that we have,” Gatchalian said.

Gatchalian also said that its 10-year-old Wellex Petroleum was studying plans of an initial public offering once its oil and mining projects are “up and running”.

“Our Chinese partner is bullish on the peso and the Philippine stock market and the economy,” he added.

Sinopec, which is controlled by the Chinese government, is listed on the Hong Kong, New York, London and Shanghai stock exchanges. It is an integrated energy and chemical company.