“DEATH, BE NOT PROUD”

Death be not proud, though some have called thee

Mighty and dreadfull, for, thou art not so,

For, those, whom thou think’st, thou dost overthrow,

Die not, poore death, nor yet canst thou kill me.

From rest and sleepe, which but thy pictures bee,

Much pleasure, then from thee, much more must flow,

And soonest our best men with thee doe goe,

Rest of their bones, and soules deliverie.

Thou art slave to Fate, Chance, kings, and desperate men,

And poppie, or charmes can make us sleepe as well,

And death shall be no more, death, thou shalt die (John Donne) 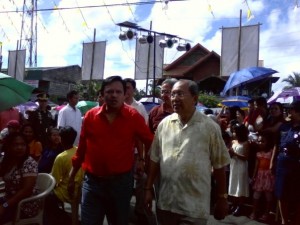 On May 17, 2011, we observe the first death anniversary of the late governor, RPN. At 2:15 pm of that date, he died along with four others in a fiery chopper crash in the campus of Quezon National Provincial High School in Barangay Iyam, Lucena City. His death puts an end to an otherwise colorful and meteoric political career of an outsider in local politics in Quezon. At the same time his death was shrouded with mystery as it came from the heels of spectacular poll defeat amid concerns of unprecedented vote buying and black propaganda.

RPN, after a speaking engagement in the capital city was on his way to Diamond Hotel to meet up with a renowned election lawyer and his personal counsel, Atty. Tony Collado. He was bringing with him loads of documentary evidence of poll fraud gathered from all the LGUs of the province. He was bringing his fight in an election tribunal and not, as feared by the authors of his electoral misfortune, on some shady hard line consultant.

To RPN, as he mused in the early morning of May 11, 2010 while sitting at the cabecera of the long table at the Governor’s Mansion, it was just politics and of course a message from his God. To the latter, he had nothing but submission as a humble servant. He said it was not the end of the world as the new tenant of Malacanang had broached a plan for him for the next three years. Upon saying all these, he rose up and admonished everyone, some unabashedly wept, “to snatch some sleep up” as he knew “that none of you here has caught a nap since last night.”

The SOCO reports belied the rumor that he was carrying millions in cash stashed in an iron vault. What the SOCO found was a burnt bundle of about half a million in cash. Strewn about were the scorched papers and effects, and of course the unrecognizable charred remains of the victims bundled in the detritus.

Speculations flew that his chopper was sabotaged or was shot from a distance. There were persistent reports that he was a victim of a rubout as his alleged connections with a drug cartel were exposed right before the elections. That the Liberal Party was bankrolled by drug money courtesy of the late party treasurer. The implication was that the presidential run of the sitting president who was LP’s standard bearer was tainted with illegal fund provenance.

All these questions were never answered for the last 12 months notwithstanding LP’s ascendancy to power. In hindsight, is this how we value friendship or loyalty? That painful events are better swept under the rug of Alzheimer’s. It looks like there is no serious effort to at least unravel the mystery of RPN’s death.  It is well known in Quezon, back up by sworn statements, on who the architects are of the literal fiery fate of RPN.

A PARTY IN DISARRAY

A party meeting is soon to be convoked by the LP stalwarts on Tuesday, May 3, 2011 somewhere in the bowels of Ortigas. It was at the instance of the sitting vice governor, Kulit Alcala and his nephew, Cong. Irvin Alcala, and of course, the legislator from the 4th district. The object of the meet is to galvanize the amorphous party. After the last elections, instead of strengthening the ranks of the party that brought them to power, the victorious instead partied for the last 12 months.

Conspicuous in the news is the political posturing of Cong. Danny Suarez of Lakas as the self-appointed mouthpiece of the former president, GMA. Malacanang has on the table a long “To Do List” on how to unshackle the bureaucracy of GMA clones. The morning after of the Arroyo capofamilia, the new president embarked on undoing the entombing of the government. The first on the list was the creation of the Davide Truth Commission which never materialized unlike the clockwork prototype in the good book’s Genesis.

Lately the Bondoc old man is dishing out political critiques against the sitting president, the patron of the Tanadas and the Alcalas. Are these two families trying to pull the wool on the eyes of the locals by sustaining their political alliance with Suarez? Will they not defend their benefactor from the onslaught of muck from the direction of Bondoc?

It is no secret that the political vinculum between the Tanadas and the Alcalas on the one hand and the Suarezes on the other is as vibrant as ever, nourished by local wherewithal (STL and political crumbs).

The old man from the 3rd district is looking for a new hibernating post. His term as congressman has reached the statutory limit. Unlike his 4th run in 2004, where his wife Aleta benchwarmed for him, pressure mounts on him to realize his life long dream of being governor at last of his province. Hasn’t he demonstrated that he is the last man standing in Quezon right now when the father and son demolished the late RPN? Does he have the clout, or humor, to put the caporegimes, i.e., the Talagas and the Alcalas in check?

2013 is the year that beckons or his followers get disappointed. But Suarez is superstitious. The number 13 does not bode well. And his figures too: he is 72 years old in that election year. All he wants now is to be venerated as a statesman like Bobby Tanada and Oscar Santos. But something in his persona denies him this wish.

Suarez does not fit the role of a fiscalizer. The tradition of the Opposition is moral leadership if not intellectual acumen. The GMA pack has none of this.

Prominent Lucena personages have the goods on him. But he dismisses old issues against him as just plain negative politics.

Shoehorning himself as a Lakas muscle, the old man Suarez is putting intense pressure on Bobby Tanada and Procy Alcala.

How can they explain the discordance underneath? Is this just the old arreglo where the congressmen and the governors take care of the political alliance above and let the foot soldiers fight it out below? Again, we will be hearing the same compromise and the lingo of accommodation: equity of the incumbent.

In the 4th district, the Tanadas of late have flexed their muscle. Sensing that Dr. Helen Tan is on the roadshow to Congress since last year, the sitting congressman forthwith asked DPWH Secretary Rogelio Singson to relieve her husband, the congressman’s advance party for the last eight years, District Engineer Ronnel Tan to the godforsaken Province of Siquijor. Rumors fly about that the Tanadas, electrified by their victory of unseating the Ombudsman, has prepared a complaint against DE Tan questioning the source of his wealth.

The game plan is clear: paint DE Tan as corrupt and therefore tainting his good wife (who has a business of her own and a medical doctor at that); and zap the resources of the Tans. Since the elections are a good two years away, acting this early will dry up the Tans given the early announcement. Unlike the plea of the 3rd District’s LP chairman Mayor Tito Ojeda for the immediate replacement of DE Roger Rejano for the latter’s authorship of a P60M ghost projects in Mulanay, Secretary Singson ignored it. Mayor Ojeda together with this writer believes that it is not farfetched that the P60M was used against the late RPN, LP’s gubernatorial bet and his official line up. This is a disservice to the political party whose vision is political moral renewal.

Bewailing the absentee and maritally challenged sitting congressman (and soul mate of a cuckold senator), supporters and the jobless thousands have trooped to the Tans. Nine of the incumbent ten mayors and a great number of village chairmen have sworn loyalty to the Tans. Bobby Tanada is unperturbed. He knows the politics of the 4th District. All he has to do is open the cornucopia of funds to his son’s district, in billions, and they get the desired results. In a derisive statement, the sitting congressman was heard saying “alam ba nila kung sino ang kalaban nila? Original (as opposed to the converts, like Speaker Sonny Belmonte) LP ito!”

With this development, the LP mayors are in disarray. All the while they know that the Tanadas for the past eight years have been grooming the loyal and obedient DE Tan. Tan never let the Tanadas down in the logistics department. Every caucus was funded by the low key DE Tan. Everything was delegated to DE Tan. He is of first name basis, for example, with the Barangay Tanod of Mapulot, a faraway village of Tagkawayan and hundred barrios as well.

This is far different from the arrangement the Tanadas had with the much lamented Concepcion Chit Asis. The latter acted as the conduit with the contractors and the district engineer during Bobby Tanada’s watch as 4th District’s representative. With mounting protest as far as from Alabat, Bobby Tanada relented and exiled her former chief of staff to his Makati City office. It became an issue in the 2001 congressional elections where Bobby’s son was pitted against Lu Yumu. The latter trounced the young Tanada by 4000 votes. Of course the rare Tanada debacle was courtesy of an informal aggrupation in the province primarily financed by the former governor Willie Enverga.

Learning from experience, when young Tanada ran again in 2004, Asis was no longer in sight. Upon swearing in, the new congressman named DE Tan as the bank signatory sans a congressional resolution which the new appointee relished given his long term plan of at last eschewing the role of footing the bill courtesy of the double-faced congressmen. DE Tan knows his business in and out. In a short while, because he is the one visible and generous at that, loyalty from the recipient is not hard to understand. When the lady from San Pablo got wind of this strange arrangement she spewed a rare gem of character-reading: “Gustong maligo, pero ayaw mabasa!”

The Tanadas however had another epiphany. They don’t have to let go of the district which Bobby Tanada has nurtured. Why not give it again to another scion? Both wannabes are qualified. The new young Tanada has the academic and professional credentials. The same is true with Dr. Tan who has vast business traction and of course academic testimonials as a medical doctor.

What is the relevance of all this, one may ask? It all boils down again to the perennial issue of who shall the party anoint. The poor mayor of Alabat, a staunch LP partidista, may for instance root for Dr. Tan. But the Tanadas have their own congressional and provincial bets as well. The old formula of reconciliation committee again comes into play to choose the local official line up and therefore resolve who gets the bigger share of the party funds. Again the President is above the fray.

All of this of course is the same old story….of political longtime ago.