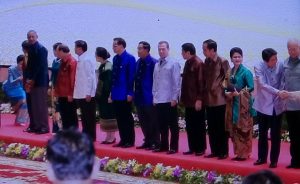 WASHINGTON, United States — Ah, romance. A 70-year-old American man from Kansas robbed a bank so that he could be sent to prison to get away from his wife, court documents showed Tuesday.

“I’d rather be in jail than at home,” Lawrence Ripple told his wife Remedios after a major fight at their home in the US state, according to a court document.

So he headed to a Kansas City bank to rob it, and passed a note to a teller claiming he had a gun and demanding cash, knowing he would be getting a change of address in the deal.

In PH, however, if you want to get away from the nagging domestic noise….one runs for President….

President Duterte is to fly to Indonesia on Thursday for a 24-hour working visit to meet President Joko Widodo on a mission to improve two-way ties and also to appeal for the life of the country’s most famous drug convict, Mary Jane Veloso.

Duterte has said he would plead for a reprieve for Veloso who was convicted of drug smuggling in Indonesia and temporarily spared the firing squad at the last minute by Widodo in April last year.

OBAMA and BAN KEE MUN, on the other hand, are appealing to DUTERTE to spare the next 10,000 on the Order of Battle List of his PNP GEN. BATO who are soon be summarily executed. Duterte retorted, “mind your own friggin’ business.”

“I TOLD you so,” Senator Leila de Lima said on Wednesday after another witness denied owning a bank account that would allegedly link her to the illegal drug trade.

De Lima was reacting to her former employee’s (Jonathan Caranto) claim that he did not own the account at the Bando de Oro branch in Caloocan City, which supposedly contained millions of pesos from drug proceeds.

De Lima suggested that Sec. Vit Aguirre should be designated Secretary of the DEPARTMENT OF TRADE AND INDUSTRY in charge of factories and manufacturing industries instead of the Justice Department.

The cancellation is in protest of Obama calling Duterte a “colored person”.

“The description smacks of racism,” Lebron said in his text message to JOJO Binay.

Senate President Pro-Tempore Franklin Drilon on Wednesday said there was nothing new with conditions for warrantless arrest set forth in President Rodrigo Duterte’s declaration of a state of emergency in the wake of Friday night’s deadly bombing in Davao City.

Constitutionalists are one and the same in saying that there is nothing new in the Proclamation issued by Sal Panelo. “It’s nothing but a cut and paste of Proclamation 1081 of Marcos,” they chorused. In fact, Panelo recruited on board experts on Martial Law Juan Ponce Enrile, 93 and Estelito Mendoza, 90 as drafters of subsequent presidential decrees and letters of instruction.

in one conference, Enrile and Mendoza were seen shouting at each other….because neither one hears the other.

On the other hand, Rene Saguisag was seen ambling on the steps of the Supreme Court carrying what purports to be a thick brief copied from Javellana vs. Executive Secretary.