The House of Representatives appropriation committee on Tuesday approved in three minutes the proposed P428.618 million budget of the Office of the Vice President (OVP) for 2017, much lower than that requisitioned by former VP Jojo Binay.

The House of Representatives appropriations committee on Tuesday approved in less than 10 minutes the proposed P19.99 billion budget of the Office of the President (OP) for 2017.

Wow! Record Breaking Feat! Actually, Bingbong Medialdea dangled what appears to be an UNOFFICIAL LIST OF MOST CORRUPT CONGRESSMEN with MATRIX before the budget deliberation. There were about 200 congressmen who moved for approval, and another 250 who seconded the motion.

The MINORITY FLOOR LEADER, who was late, begged the Secretariat to check his attendance and insert in the MINUTES his vehement and vigorous approval.

President Rodrigo Duterte on Monday said the US Special Forces must leave Mindanao, saying their presence would only worsen the situation in the strife-torn region.

“The US Special Forces, they have to go. They have to (leave) Mindanao. There are many (Americans) there,” the President said in a speech at the oath-taking ceremony of the latest batch of his appointees in Malacañang.

Bong Go was heard whispering to Bingbong Medialdea to get ready for a longer weekend by the President in Manila or Cebu or Bacolod or ILOILO after the announcement.

Kris Aquino finally confirmed that she’s moving to GMA after 20 years of working at ABS-CBN.

That’s the way it is with politicians. First, she abandoned Jojo Binay. Second, she’s nowhere now beside Bistek. And now this, She’s leaving a sinking ship.

LUCENA CITY—A mother and her daughter, who belong to the Alcala political clan in Quezon province, were arrested by policemen in a drug bust in Tayabas City on Sunday night, police said on Monday.

CANBERRA—When President Duterte flew to Laos last week to attend the Asean summit on his first foreign policy trip, he had a fearsome international reputation as the emerging butcher of Asia in the wake of his bloody war on drugs in the Philippines.

When asked if he’s not worried by the label, he answered, “eh bakit si Pacman Berdugo ng mga Mejicano, may problema ba tayo?”

Internet researchers have long known that the Chinese government manipulates content on the Internet. Not only does it censor heavily, but it also employs hundreds of thousands of people, the so-called 50 cent army, to write comments on the Internet.

The MINORITY FLOOR LEADER DANILO SUAREZ wants to recruit social media kumaentators similar to the Chinese model. The 4Ps shall be expanded to include the 16.6M junkies.

“SEX, sex, sexual intercourse, penis, penis, vagina.” More than 150 undergraduates are sitting in a lecture hall at China Agricultural University in Beijing, shouting loudly. Many are sexually active, or soon will be. Yet for most it is the first sex education class they have attended.

In the PH, teachers and parents don’t teach SIBIKA anymore as their President’s speeches are all laced with these esoteric words.

IBA, Zambales, Philippines – The jail warden of Zambales has been relieved from his post over alleged illegal activities, including the entry of illegal drugs in the facility. 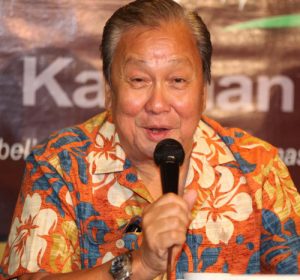 Danilo Suarez, the elected Minority Floor Leader by the Majority Party of President Duterte, slammed Barack Obama for what to him was a denigrating epithet addressed to his President.”Racist and a Bigot ‘yang si Obama,” Suarez was heard saying to the Congress press. “Akalain mong sabihing colored person si Presidente?” When one reporter corrected him, “eh sir ang sabi po eh ‘colorful person’.”

Duterte, in a press conference at the Davao International Airport after his arrival from his state visit to Indonesia and the ASEAN summit, said China’s help “will be plenty.”

“China has committed to help us,” he said, adding that the help won’t be limited to the Chinese government building a drug rehabilitation center in Fort Magsaysay in Nueva Ecija.

Duterte said his administration’s budget this year is limited.

The US and Japan stand in attention. As a consumer country, we just want the best quality bid. These posturings are nothing but to get the best price. Call this Bravura? I look at this as a call for a Swiss Challenge. His nose at last shows punctures of ‘BRILLIANCE’….Ligaya.

Those in the know disclosed that with Panelo’s unprecedented diplomacy, Duterte is now eyeing MANNY PACQUIAO as DFA Sec and Mommy Dionisia as US Ambassadress. Career diplomats are relieved that with these two at the helm, no scripts or protocols shall be observed anymore as the President prefers MASKIPOPS diplomacy.

“Tumahimik sila. Kasi ako handa na ko. I was waiting for Obama to respond. Eh ito, abugado to abugado tayo. Sige daw. Wala. That was the only encounter. That was the only exchange at the holding room and when I said, ‘I never made that statement, check it out,’” President Duterte said.

Barack Obama reportedly responded, “my men will talk to you…” glancing at his aides who were seen scampering about to look for the new word uttered by the PH President: ABUGAGO.

It was not true that true that Obama and Ban Ki Moon were silent. Both of them tweeted Bong Go suggesting that since the PH President has gone historian, why doesn’t he include the Martial Law record of desapericidos of his friend Bongbong Marcos.

Speaker Pantaleon “Bebot” Alvarez on Friday grilled the officials of the Department of Transportation (DOTr) on their possible conflict of interests during their stint as undersecretaries with deep business background.

Congressmen should be asked who their fave CONTRACTORS are who are eyeing DOTr contracts. SOPs galore….Alvarez was once linked to an airport excavation mess. This guy knows whereof he speaks.

This is first in history where the Majority Party acts as the Opposition in nitpicking the Budget prepared by the Administration which is supposed to be propped up by the Majority Party headed by the Speaker handpicked by the president himself. Is the grilling a prelude to earmark the motherload contracts to the favorite contractors of the Speaker and the Minority Floor Leader, Danilo Suarez, known to be a dealer of reconditioned airport radar and equipment? “Mamumulutan pa ang mga Taran….!” spewed Dick Gordon when he learned about the “ihawan” (grilling).