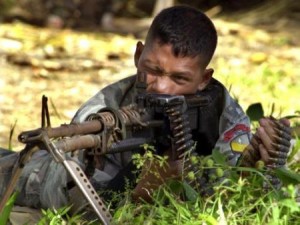 DAVAO CITY, Philippines — The Communist Party of the Philippines is accusing the United States of having a hand in Friday night’s deadly blast here.

There’s a grain of truth to this. Remember Digong calling the US Ambassador a BAYOT? There’s the motive. Means? They are friends with IS and ASG. And opportunity? The US has deployed a new missile.

Presidential Spokesperson o “Ernie” Abella on Saturday emphasized that the entire country, not just Mindanao, is covered by the declaration of the state of lawless violence due to heightened security issues–headline

Citing a report by the Philippine National Police (PNP), Communications Secretary Martin Andanar said crime volume went down by 9.8 percent to 50,817 from 56,339 in the same period last year.

“The campaign against drugs and crime of the present administration is gaining positive results a month after President Rodrigo Roa Duterte assumed office in Malacañan,” Andanar told radio station dzRB.

GROs in Ermita and Malate are now unergoing special training on how to detect suspicious persons and their bulges….

President Rodrigo R. Duterte’s authority under the declaration of state of lawlessness is limited to summoning armed forces to suppress violence “through ordinary police action,” according to Integrated Bar of the Philippines president Rosario T. Setias-Reyes.

Pres. DUTERTE and Gen. BATO thanked the IBP for reminding them of the parameters of the PROCLAMATION especially the phrase “ordinary police action.” They said that they have been doing that since June 30 2016 that has netted 2500 EJK so far “through ordinary police acton or OPA. With this encouragement the DUO is BUSINESS AS USUAL.

Before noon, Abu Sayyaf denied that it was behind the deadly attack. Instead, the terrorist group pointed to ally Daulat Ul Islamiya as the perpetrator of the bombing.

Last night however DAULAT UL ISLAMIYA pointed to the SEX BOMB group as the culprit. We are expecting some paliwanag from MOCHA group who wants to have some credit to the confusion.

The reason is clear. The COÑOs in Ayala don’t want any link with the SUPPLIERS of SIGNATURE DRUGS to call center employees.

Peter Lavina wrote that three groups were likely behind the bombing in Davao City last night that left 14 dead and 67 injuredt: 1) drug lords, 2) terrorist ASG, and 3) political opposition. He stands corrected. He further clarified that there is a fourth group. “One that is a collusion of these three suspects. An alliance of all anti-Duterte forces,” Lavina a?ded.

There are more actually. A fifth group which comprises the smugglers and Customs Officials threatened by FAELDON of summary execution. A sixth group, the generals and pols he shamed. A seventh group, his ex GFs from SM DAVAO he dumped because of his own ENDOs…..