The National Anti-Poverty Commission (NAPC) has terminated the contracts of 155 consultants who were collectively receiving more than P5 million a month in professional fees, following President Duterte’s directive to remove all holdover officials from the previous administration.

Manny Pacquiao was fuming mad when he learnt about NAPC ‘s plan to scrap the contracts of 155 consultants. He said there are technical aspects and convulated research in the determination of who can be considered POOR. That’s why he has on his payroll 1000 consultants for this purpose. He cited as precedent the 14000 consultants of his predecessor LL on top of the 20000 interpreters he hired during the latter’s 12-year stint.

An additional 216 tax examiners may be slapped with administrative charges if they fail to explain to Internal Revenue Commissioner Caesar R. Dulay why they failed to submit reports on investigations of alleged deficient taxpayers on time.

The 216 Examiners were heard saying that most of the Delinquent Taxpayers subject of the LoA are UKAY UKAY traders who keep on making TAWAD of their tax liabilities. That explains the delays of REPORTS.

If you declare war and your aggression is relentless, there are those who are cornered like rats who want to SURVIVE. Is fighting back NOT AN OPTION? That is why we invented for the last 2000 years the “ordinary course of law” as refuge to those who can’t fight back.

Gen. Bato assures the Senate that out of those 2000 killed by the police operatives, the same number violently fought back by shooting first the law enforcers. The PNP Chief puts on record that they were able to retrieve 23 firearms from all the 2000 encounters. 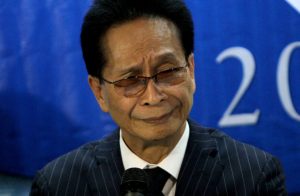 Sal Panelo says that the President can declare DUTERTE LAW which is allowed under the CHARTER “when public safety requires it.”

Gen Bato, upon seeing his Boss later in the day, “Hey meyn. Hows ur day meyn?”

Obama and Ban Kee Moon want yo be provided with a GLOSSARY of colorful Cebuano and Tagalog cuss words once Duterte rises to the podium………….

A third UN official, who declined to be identified, said it was “basically unheard of” for a leader to be too busy to meet the UN secretary general.

BKM: Who the F.CK cares?

To emphasize his displeasure, the President wants to rename UN Av in Manila to UNITED COLORS OF BENETTON….

DUTERTE: I once considered being a priest-HEADLINE

HAD THIS HAPPENED, by now, in Gods grace, we would have the FIRST ASIAN POPE….POPE CONSTANT…IN…O.

A third UN official, who declined to be identified, said it was “basically unheard of” for a leader to be too busy to meet the UN secretary general.

If you have three girl friends and counting, tell me who can’t be as busy as you.

Pichay said that he will slash the MENTAL HOSPITAL’S budget if those “crazies” in the Duterte Adminstration are not confined promptly. Cong Edgar Erice was heard asking, “does that include her BOSS?”

MANILA – Time is “running out” on President Rodrigo Duterte’s promise to suppress the drug menace in his first six months in office and security forces will ramp up their efforts to help him deliver, the chief of the Philippine National Police said Friday.

The DRUG LORDS AND PUSHERS say they dont mind if Duterte will END the DRUG WAR now. They dont mind either if the govt will have a VICTORY PARTY earlier than usual. They commit to send 100 LECHONG BACA courtesy of KERWIN ESPINOSA,  Myr MABILOG, and Ex-Gov ESPINO.