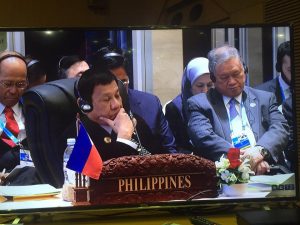 The ASEAN meet encroaches on the siesta time of the President and his Cabinet. DFA Sec Jun Yasay is now requesting the ASEAN Secretariat to move all conferences of ALL HEADS OF STATE WITH THE PH PRESIDENT in the “wee hours of the morning” when he is in his elements and without the prying media

The FIRST LADIES of the ASEAN nations objected, except Sultan Bolkian. “Did you invite the Mayor of Tacloban?…” the Sultan was heard asking Jun Yasay.

Actually, all heads of state are excited to meet with the PH President. The Singapore PM wants to ask him personally what HINDOT is. “IS IT SILENT T?” The Chinese PM wants to know how HAO SHAO evolved in the PH. The Thai Premier is curious about CHUKCHUK. The Malaysian PM has listed OROS, CHUPA, JAKOL.”These will come handy in case Anwar Ibrahim plans of coming back.”

The Vietnam PM has only one word for clarification: HELICOPTER.

“Expect stricter and longer immigration protocols in view of the state of lawlessness. This mandates all agencies in the customs, immigration and quarantine services to tighten security,” said Immigration Commissioner Jaime Morente.

Myr Mabilog, Gens. Loot Pagdilao, and SEN. LEILA’s Ronnie and Warren are still in the country. That’s why.

PASSENGERS flying out of the country must be at airports four hours early as part of expected beefed-up security measures, including stricter immigration protocols.

Plus the GRIDLOCK TRAFFIC, weather disturbance, tarmac overload, and of course, the strict enforcement of the watchlist against the LOVER BOYS of Leila, etc ONE WEEK is a better option.

After the ASEAN MEET, Malacanang is busy lining up the favorite cuss words of the President to be deployed at the next APEC, STATE VISITS, ETC.

ANDANAR BONG GO and ABELLA are in agreement that GAGO PESTE YAWA PATYON KTA are in right order of appearance. Yasay is excited as his patron is enriching the QUEEN’S TONGUE.

IT’S ALL in the mind, a transport official said of the country’s traffic situation.

Mayor Mabilog shot back that the so called DRUG SITUATION is nothing but a state of mind by the GUY FROM DAVAO.

“The LISTS and Matrices are products of the witching “wee hours”…added by Mabilog’s patron, BOY LECHON.

PETERSBURG (The Borowitz Report)—Hopes for a positive G20 summit crumbled today as President Obama blurted to Russia’s Vladimir Putin at a joint press appearance, “Everyone here thinks you’re a jackass.”

The press corps appeared stunned by the uncharacteristic outburst from Mr. Obama, who then unleashed a ten-minute tirade at the stone-faced Russian President.

“Look, I’m not just talking about Snowden and Syria,” Mr. Obama said. “What about Pussy Riot? What about your anti-gay laws? Total jackass moves, my friend.”

The White House has been clarified that the Philippine Press churns nothing but SATIRE just like the NEW YORKER upon DUTERTE’S assumption to office.

Sticks and stones may break my bones (but words will never hurt me).

MANILA – President Rodrigo Duterte said he did not mean to start a fight with US President Barack Obama, toning down on tough talk that led to the cancellation of a meeting between the two leaders.

President Duterte ordered crates of DURIAN as peace offering to his US counterpart. When Putin heard about the DURIAN being sent to OBAMA, Putin was heard saying, “If Biden meets Barry at the airport with the Durian, he’ll take back what he said before that Obama smells good…”

CONG DANILO SUAREZ called on INQUIRER to say that the MINORITY party supports Obama’s observation that President Duterte is a COLORED person and therefore a soulmate of the US President. Suarez rooted for JOJO BINAY last presidential elections and he was heard whispering to the Makati Boy Wonder, “sayang Boss. Kung ikaw ang nanalo kakampi mo si Hillary.”

The good Senator should be reminded that the President is blessed with two heads. The puzzle is Which of them is he using in LAOS?

Sandra Cam was likewise heard saying that Sen. de Lima has in her employ “two heads….”

Abe also told Duterte, “Mr President is quite a famous figure also in Japan, and I am very excited to see you in person.”

Duterte shot back, “you Japanese also famous in Malate and Ermita. Our girls also excited when they see you walking in.”

Foreign Secretary Perfecto Yasay Jr. on Monday blamed the media for highlighting President Rodrigo Duterte’s scathing remarks against the United Nations in a post-midnight press conference on Sunday, claiming the Chief executive’s statements were taken out of context.

He said the media should have realized that the President made the statements “in the wee hours of the morning and he was very tired.”

From day one, the President projected a SUPERMAN image in the “wee hours of the morning.” It looks like he is more of Ninja Turtles’ MICHELANGELO whose often misunderstood word is COWABUNGA!

The Department of Education has issued a new MEMORANDUM to all private and public schools to discontinue CURRENT EVENTS in HEKASI subject. Pupils as young as PRE-KINDERs have shown proficiency in profanity.

The Supreme Court promulgated a recent Decision that PUTANG-INA MO KA is no longer slanderous but rather a mere figure of speech.

With the word PUTANG-INA getting a million hits on GOOGLE, MERRIAM-WEBSTER, OXFORD, and CAMBRIDGE dictionaries are now officially adding the phrase as a new English word in league with boondooks, calesa, and araro.

ROGET’S on the other hand has made new synonymous words. DUTERTE and PUTANG-INA are now one and the same signification.

President Rodrigo Duterte’s “expletives” are part of his language that should not affect the country’s relationship with other nations, Senate President Aquilino “Koko” Pimentel III has said.

On learning this, the President told Martin Andanar to remind the senator that the President is not conversant in SWARDSPEAK. “Sa usapang lalake, ‘wag kamo siyang makialam. Ang nasabi ko’y nasabi ko na!….Bayot!” the President added.

It’s unusual for one president to tell another what to say or not say, and much rarer to call the other a “son of a bitch.” Duterte managed to do both just before flying to Laos for a regional summit, warning Obama not to challenge him over extrajudicial killings in the Philippines.

Malacanang announced that the President will be home shortly as all his engagements with the attending HEADS OF STATE were cancelled and he doesn’t want to look isolated and of couse STUPID.