At last, there was UNITY in the HOUSE that never happened during FM’s Cory’s FVR’s terms….. 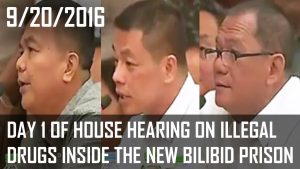 During the lunch break called by the committee on justice yesterday, security escorts of convicted drug dealers thought one of the convicts had escaped and reported the matter to House officials.

The report prompted Speaker Pantaleon Alvarez to order a lockdown of the House premises at the Batasan complex in Quezon City.

The lockdown was well received by the people saying that in one instance birds of the same feather were at last together.

“No other country can interfere with Philippine affairs, neophyte Senator Manny Pacquiao said on Wednesday, reacting to Senator Leila de Lima’s call for the United Nations to come to the Philippines and look into the alleged spate of extrajudicial killings here.”

“No other country can interfere with Philippine affairs, neophyte Senator Manny Pacquiao said on Wednesday, reacting to Senator Leila de Lima’s call for the United Nations to come to the Philippines and look into the alleged spate of extrajudicial killings here.”

Congressman Rey Umali wants Jaybee Sebastian to testify as it appears all the narrations of convict-witnesses point at him.

(1st UPDATE) Angelina Jolie has filed for divorce from Brad Pitt and is seeking custody of their six children, TMZ reported Tuesday, spelling the end for “Brangelina,” one of Hollywood’s highest-profile celebrity couples.

This was how Senator Leila de Lima, in a privilege speech on Tuesday, shot back at those who she said were fabricating evidence against her.

“Just give me a little extension of maybe of another six months. Because I never have that idea of hundreds of thousands of people in the drug business. And what makes it worst is, they are now operated by people in government, especially those elected officials,” the President said.

Wheh the President heard this, he was fuming mad. As Davao City Mayor he says he pays his Motel bills “ora mismo.”

Senator Nancy Binay disclosed on Tuesday that she had one condition before she agreed to vote in favor of removing Senator Leila de Lima as chair of the Senate committee on justice and human rights.

Her condition was for her to replace Leila as Justice Chair. “Patawag naman natin Dad ko para maibigay naman n’ya side n’ya.”

“I read the condemnation of the EU against me. I will tell them, ‘fuck you.’ You’re doing it in atonement for your sins,” Mr. Duterte said in a speech before local government officials in Davao City.

The President should really be worried about the glut of drugs nationwide affecting intelligent choice.

By a Resolution passed by the HOUSE voting UNANIMOUSLY 450-0, they demand the resignation of the Janitor for not keeping up with the tradition of Congress….