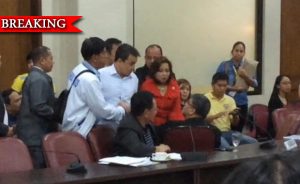 Rep. Robert Ace Barbers, for unparliamentary conduct after they nearly engaged in a fistfight during a House panel deliberations on Charter change.

In a nine-page complaint filed with the House ethics committee, Pichay accused Barbers of violating the House rules on code of conduct.

Barbers on his part dismissed the charges as nothing but a ‘TRICK OR TREAT’ ploy of Pichay who himself is facing plunder charges before the Ombudsman.

But what about the Panatag fishermen?

After the lavish dinners tendered by Chinese officials followed by the obligatory mo-tai toasts, the question now is: What has President Duterte’s state visit done to assure the Philippines that it would be given a fair deal in its maritime row with China?

“Why did you put your hands in your pockets and chew gum in front of President Xi Jinping?” asked Kunihiko Miyake, a former diplomat, in a column published in the conservative Sankei Shimbun on Thursday.

The minority bloc of lawmakers in the House of Representatives on Thursday called for the filing of criminal charges against Senator Leila De Lima for her alleged hand in the proliferation of drugs at the New Bilibid Prison.

In a press briefing, Minority Leader Quezon Rep. Danilo Suarez revealed their own report into the inquiry in aid of legislation on the Bilibid drug trade under the stint of then Justice Secretary Leila De Lima.

In a tit-for-tat, de Lima called the CoA and the Ombudsman to investigate Suarez on the proliferation of ghost projects in the Province of Quezon where the Suarez family holds sway. “Tamang-tama, dahil Halloween ngayon, trick or treat tayo sa mga ghost projects ni Suarez.” the ex-Justice Secretary was heard calling her friend Conchita on the phone.

MANILA, Philippines – The police officer who drove the vehicle that plowed through protesters in front of the United States embassy in Manila last week may be dismissed from the service if he fails his neuropsychiatric evaluation, an official said yesterday.

SBMA is now being organized by Sal Panelo. Asked what it stands for, he replied, “SMALL BALLS MACHO ASSOCIATION.”

Germany: Muslim migrant with four wives and 23 children claims $389,000 a year in benefits.

Budget Sec Ben Diokno is scouring the thick 2017 GAA that provides for one common-law wife and one minor kid plus three girl friends.

The Louder the Monkey, the Smaller Its Balls, Study Finds

Members of the Cabinet sport a knowing smirk on their faces lately when this study came out. Leila is expected to call a press con to discuss the implication of this study to the loud noises coming on weekdays from Malacanang and on weekends from Davao. The Minority Floor Leader true to form has not issued any statement for fear of being lumped along with the Gang of Loud Mouths.

Koko, Kiko, Ping and Tito are conspicuously mum when this study went viral. Apparently only one senator has yet to pick up this piece of news: DICK.

The patience of motorists and train riders alike were tested on Tuesday when Metro Rail Transit-3 (MRT-3) operations bogged down for nearly two hours while 18 road accidents were reported all over Metro Manila. 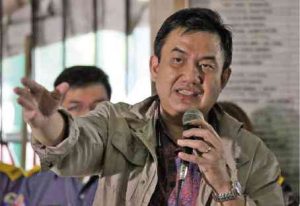 The ashes of cremated Catholics cannot be kept at home, scattered or divided among family members, the Vatican has announced in new guidelines.

It has been disclosed that not all sachets found in possessions of EKJ victims contained meth or shabu. SOCO operatives reported that these powders were ashes of cremated relatives of the victims which they kept as mementos or amulets.