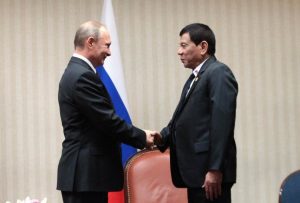 “MANILA – President Rodrigo Duterte warned government officials who are not heeding his call to submit their courtesy resignations to expect no courtesy from him.”

He expects Leni Robredo to give way to his friend, Bongbong, whom the President will appoint as Housing Czar in May 2017 after the one year DQ expires. Wailing in the wings as well is Alan Peter who is expected to replace Perfecto Yasay in the DFA portfolio. “Pilyo si Presidente. Gusto n’ya fireworks between these two ‘Buang’ during Cabinet meets.” Sal Panelo quips.

““We would want a quiet, peaceful, happy and auspicious Christmas for all Filipinos… Hopefully, in the coming days, we will see what is good in our country and not the disagreements,” Leni Robredo said in Filipino in an interview with reporters.”

“Don’t be a fugitive like me, Senator Panfilo Lacson said in jest before Senator Leila de Lima left for the United States and Germany on Sunday.”

“I’d like to announce that I’m going back to the Alunan doctrine. [Having] two or more armed guards is [considered] a private army. Iyang dalawa na iyan, if two bodyguards cannot save you, then that is your destiny in this world,” President Duterte said in a speech in Malacañang.

“Duterte: Fewer people getting killed every day in drug war”

But those in the know claim that St Peter is complaining of the sudden influx of refugees from the PH. “Mali daw talaga ang nayare nina Marvin at Matira. Kasi nga naman, bakit sa Langit napunta?”

In SEARCH of variety: US and GERMAN CUTS! The lady senator hums “MANEATER” in her Business Class seat.

““The practice of muzzle taping only shows the distrust of the organization to its very own policemen such that we need to require unit commanders to physically put a tape around the muzzle of the firearms of policemen,” a top PNP Official said.”