Duterte responsible if something happens to me, De Lima says-News 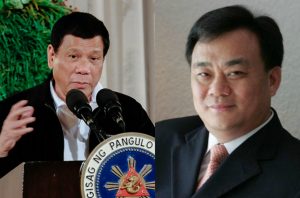 “If indeed Jack Lam, through his middleman Wally Sombero, attempted to bribe Sec Vit Aguirre, why didn’t the latter effect right then and there a warrantless arrest of Sombero, the latter being in flagrante delicto, and thereafter promptly move to prevent Lam’s departure or escape from the country?” Leila De Lima said in a statement.

The President asked that also but was convinced by Aguirre’s reply. “Boss, baka manlaban eh. At baka masabunutan ako!”

The pain became more acute every time Jinggoy rises from a seating position, and despite rest and medications, the disturbance felt on his knee still won’t go away.

His doctor said he has patello femoral pain syndrome, and has recommended that he undergo an MRI and x-ray to better assess his condition.

Jinggoy was used to having cash-filled pockets and that put a strain on his knees.

“Oro” producer readies a statement that no DOG was slaughtered during its filming….

And in the midst of all this, Biz Buzz learned that a representative of Limay Mayor Lilvir Roque actually called on Ramon Ang, who heads Petron’s parent firm San Miguel Corp., a day before the complaints against the company hit mainstream media.

Senate President Aquilino “Koko” Pimentel III sees nothing wrong with lawmakers identifying pet projects for inclusion in the national budget for funding as long as they do not interfere in their implementation, which is barred under the 2013 Supreme Court decision that declared the pork barrel system unconstitutional.

Mocha joined the fray. “Petting is ok. It’s Necking that I intend to ban on Prime Time TV….”

MANILA — Former drug addicts who surrendered under the police’s Oplan Tokhang will join the Black Nazarene procession on Monday (Jan. 9) in hopes to usher two kinds of changes: the public perception on drug addicts and the perception on how policemen handle surrenderers.

They are welcome to the newly minted IGLESIA NI RODY where, according to its founder, one can do anything. “Matindi ang paper ni Mocha dahil sa INR may gender equality. Si Mocha ang First Cardinal at si Rody ang First Pope.”

Manong Chavit Singson on the Miss U contest to be staged here, said, “I have financed this project not to make money but to help promote the country’s image so that we may become a favorite tourist destination, thus contributing to the economy and the appreciation of our country and our people. I wish every Filipino could experience the coronation night live. It is a once-in-a-lifetime experience, and tickets are easily available in all SM outlets.”

Chavit bans James Taylor’s hit song “You’ve Got A Friend” in the pageant; EJK moratorium at least in the whole month of January; and a Gag Order on the President.

Millennials, like each generation that was young before them, tend to attract all kinds of ire from their elders for being superficial, self-obsessed, anti-intellectuals. But a study out today from the Pew Research Center offers some vindication for the younger set. Millennials are reading more books than the over-30 crowd, Pew found in a survey of more than 6,000 Americans.

In PH, Millenials are set to out-pace their elders in the use of expletives. Sooner, they will be deluged with shows awash with adult content courtesy of the newly-minted MTRCB Board Member. “Balik na po ang Penekulang Pilipino. Ginagawa na po ang prequel ng ”Uhaw’ at ‘Dingding Lang Ang Divider’.” ‘ika ni Amay Bisaya.

“That’s not true. There is no pork barrel. There is no PDAF (Priority Development Assistance Fund) in the budget. There are no post-enactment projects in the budget,” Davao City Rep. Karlo Alexei Nograles said.

It’s like Lydia’s Lechon telling us their ROAST PIG has no cholesterol.

President Rodrigo Duterte has appointed self-styled “sex guru” Mocha Uson to serve on the board of a state agency tasked with shielding Filipinos from immorality and excessive violence in film and television, sparking a firestorm of protests on social media.

Asked why Mocha Uson was named to the state agency (MRTCB) created to review films and TV programs, Sec Martin Andanar said: “Why not?”

KAMPALA, Uganda — Fourteen people were killed when a taxi swerved to avoid a cow and crashed into two large vehicles on what is known as Uganda’s deadliest road, police said Wednesday.

Nine other people had serious injuries. The cow also died.

Religious experiences have a similar effect on the brain as taking drugs, according to a new study.

“So that’s the reason why Rody blasts the Pope and the Bishops on a daily basis.” Soc Villegas observes.