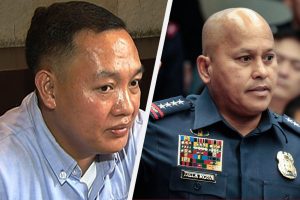 “Regarding the murdered Korean businessman, the President will not tolerate any police abuse. All these police scalawags will be dealt with and prosecuted to the fullest under the law,” Sal Panelo told reporters in an ambush interview on Friday.

What’s the difference between Marvin Marcos and SPO3 Sta Isabel?

Speaker Pantaleon Alvarez on Friday asked Director General Ronald “Bato” Dela Rosa to quit his post as chief of the Philippine National Police (PNP) to save President Rodrigo Duterte from further embarrassment following the murder of a South Korean businessman at Camp Crame.

For passing just one law in 6 months, this Speaker should instead be appointed House Floor Manager. 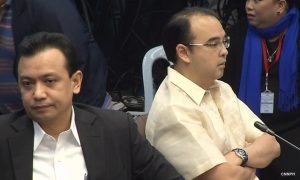 Senator Alan Peter Cayetano posed a challenge on Friday to Senator Antonio Trillanes IV: Let’s resign from the Senate together. 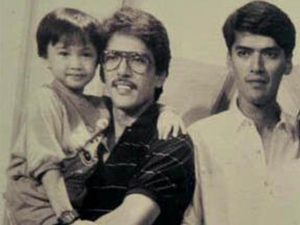 “If I have my way, papatayin ko kayong mga pulis kayo (I will kill the policemen involved). But I cannot do it,” Gen Bato de la Rosa said.

True to form, Trump’s Transition Team called up PH Police Chief to belt out the popular Frank Sinatra ballad, “MY WAY” in the 45th US President’s Inauguration today.

The head of Hanjin executive Jee Ick Joo was covered with a packaging tape and then strangled while inside Camp Crame, the headquarters of the Philippine National Police (PNP), a Department of Justice (DOJ) resolution revealed.

President Rodrigo Duterte on Thursday wondered why the military’s air assets were not utilized during the Mamasapano encounter in 2015.

Because Kris Aquino was using them.

The Bicolana in Leni may outlast Rody. “Not so fast.” Mocha protested. “How’d u know that his kind of ‘sashimi’ isn’t spicy?” she added.

MANILA, Philippines – Voting 14-7, the Senate on Monday, January 16, stopped Senator Antonio Trillanes IV from leading the probe into the Bureau of Immigration, including the proposal to reorganize the agency.

It’s getting expensive for Jack Lam to do business in PH. First, the BI skimmed P50M from him. Now, 14 Senators have their own version of DAP shielding BI from the prying eyes of Drilon Abad and PNoy: DUTERTE AGUIRRE and PIMENTEL.

GUIDONIA, Italy — Pope Francis admitted on Sunday to sometimes having “darkness” cloud his own faith, while warning against “Christian parrots” who pay lip service to the church without acting on its values.

“Has he joined the IGLESIA NI RODY?” Mocha asked.

REMATE has clinched several stories on Rody cheating on Honeylet but was warned that its circulation would tank if they get published. “Walang cuentang cuento.” ‘ika ni Mocha. “Eh anu, kasi?” she added.

When asked who will inherit the license, Cory Quirino said, “It will be assigned to someone else, hopefully a friend or associate whom I already introduced to [the Miss World Organization].”

Ping Lacson said that this is the “biggest pork on record.”