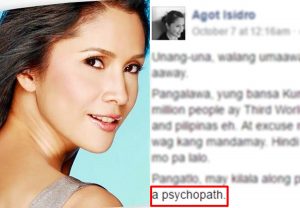 Isidro also wrote: “May kilala along psychiatrist. Patingin ka. Hindi ka bipolar. You are a psychopath.”

The HOUSE knows they have no qualified prosecutors. Expect the dismissal of impeach raps vs Sereno and Conchita

HOUSE dilemma: No competent lawyers as prosecutors. RUDY FARINAS can’t be field general and prosecutor at the same time unless a good DAP is on the table.

WASHINGTON SYCIP dies at 96 while on a plane enroute to New York.

Seated between Bobby Ongpin and Ramon Ang in his last event, Wash Sycip said “I felt like Jesus Christ at crucifixion…”

In fairness to Rody, he arm-twisted Mighty and PAL to cough out P40B and P6B for unpaid taxes. FVR sold Fort Bonifacio for P4.5B

CJ Sereno is thankful to being impeached. She has lost weight lately.

Rody said the LP and the communist rebels were reuniting to remove him from the presidency. Ninoy Aquino-Dante Buscayno sequel? MARTIAL LAW IN SEPTEMBER 21, 2019.

Rody as Taxman: He collected P40B from Mighty and P6B from Lucio Tan. Prieto/SUNVAR has yet to disclose how much it paid to Rody. Atty Mans Carpio is the happiest broker in town.

To the PUNDITS: Don’t over-analyze Rody He’s just taking us for a ride