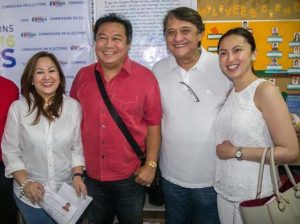 Playbook of Tony Boy: 1. Join Hugpong; 2. Undermine Alvarez; 3. Unseat the Speaker by dangling super pork to Congressmen; 4. Bankroll Mrs Alvarez to oppose Mr Alvarez in 2019 congressional elections in Tagum/Davao del Norte; 5. Lobby appointment of friendly Sandiganbayan justices; 6. Convince Sara to run for Congress in 2019 and install her as Speaker in 2019-2022; 7. Nominate Sara as Presidential bet of Hugpong in 2022; 8. Convince Bong Go to run for Senator and replace Koko as Senate President; 9. Reunite with Margie Moran and live happily ever after…

Memo to Pacman and Congressmen: Book your flight to Davao now for HUGPONG oathtaking

LOREN LEGARDA lawyers for Bong Go because she’s running for Antique Governor in 2019 begging for all the Pork she can get. I didn’t know that aside from being a newscaster she’s also a MANANANGGAL or a lady lawyer….

Benham Rise 5 Features shall be renamed after the Girl Friends of the Speaker: Ligaya Soledad Rosario Rossana and Myra

How true is the rumor that the Malacañang Supplier of TOILET PAPER printed the 1987 Constitution on the disposable sheets….?

“BONG PINEDA made GLORIA President” Atong Ang says. “GLORIA made me President” Rody says. GO FIGURE WHO THE KINGMAKER IS.

When Rody asked INK’s Manalo where in the Bible does it say one can marry once, the Church leader replied “there is none, Mr. President!”

Marcos Gloria Erap Pacman and Rody went to the devil to sell their souls. They were driven away because they have nothing to sell

Lapulapu Luis Taruc Claro Recto and Rody found themselves at the Pearly Gates. The gatekeeper asked them “as heroes who did u challenge?” Lapulapu declared “I confronted the number one naval power in the world: España!” “Get in brave man!” the gatekeeper said. Taruc says that as head of the Hukbalahap he “confronted the toughest Army in Asia, the Japanese Imperial Army.” He was led inside by the gatekeeper. Recto for his part says “I challenged the Imperialist Americans!” He was allowed in. Rody excused himself and was seen serving coffee and massaging the feet of Deng Xiaoping….