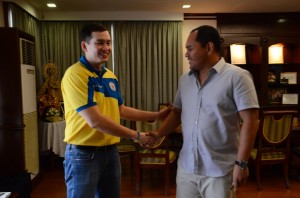 Willie Enverga, the grand patriarch of the Enverga dynasty tried to pass one over the Alcalas. But his gambit was seen early on by the Alcalas and the old man is fidgety right now and is bent on breaking his alliance with the former.

The ploy of the wheelchair bound former governor is to get the assurance of the Alcalas that no one shall oppose his son Mark in his quest for his last and third term. Having beaten the former Secretary of Justice, Agnes Devanadera, the father and son believe that no viable candidate has the logistics like Agnes that can pose any challenge with the reelectionist congressman of the first district.

With this mindset, the father and son went on their culture of sloth and forgot their constituencies for the last three years. The barangay captains were made to wait and the mayors’ calls were not returned. Important events were ignored and SOS pleas on days of calamities went unheeded.

The Envergas went on their merry ways travelling and junketing and stayed most of the time at the Site and in Alabang where the father and son are neighbors, their mansions courtesy of Quezon taxpayers.

Nobody was minding the store of the first district except the energetic mayor of Lucban, Bonbon Villasenor. Bonbon has properly read that Mark Enverga’s DNA is exactly like his father’s. Mark sought the position of congressman to get an honorific title instead of Sousse Chef. And of course to earn SOP on the side and with enough materiel to challenge the next governor: Irvin Alcala or JJ Suarez, whoever gets successful comes next local elections.

The Alcalas are also good in the Lit of politics. They were able to decipher the body language of the wheelchair bound ex-official: he wanted to give the Province of Quezon a third choice, no other than him. His son being unopposed, all he has to do is tap his old contacts in the second and fourth districts, while his son will make sure that he gets the vote in the first district.

Let the Suarezes drown in votes from their baluarte in the third. With the Talagas loyal and unwavering support, he can have a good slice of Lucena.

This was the game plan of the old man Enverga. He wants a resurrection and confirmation that he is the last man not sitting down but up standing having sideswiped the likes of Eddie Rodriguez, the late Jun Punzalan, Benny Marquez, the Tanadas, Oca Santos, the late Raffy Nantes.

Right now he sets his eyes against the Alcalas and the Suarezes. To Willie Enverga, the victory of JJ Suarez over the late RPN was a fluke and fueled by stolen money from the Road Board courtesy of GMA. Like an old champion, he wanted a good bout with the Suarezes whom he holds in low esteem.

To the old man Enverga, the old man Suarez is just a strip out confidence man. Suarez is way below his breed and he nurtures the idea that Quezon does not deserve the Suarez family.

Hence he has drawn his roadmap for May, 2013 by running Governor under the Nacionalista Party, anyway his son is allied with the Liberal Party having taken his oath as NPC partisan. Should he win the governorship, he will hand it over to his son as his legacy and allow his scion to enjoy an uninterrupted 3-term governorship just like him six years ago. At last, he earned the legendary niche in local politics as the George Bushes of Quezon.

His son Mark has commenced organizing the NPC in preparation to 2016. And there are formidable personalities in the party of Danding Cojuangco especially in the fourth district. All he has to do is groom a Talaga to be the next congressman in the second district anyway the Talaga patriarch, according to the ex-governor, is certain to reclaim his old seat as Lucena City Hizzoner. Dondon Alcala was beaten in 2007; the young amateur Enverga believes is going to meet the same fate in 2013. His employees and loyal Enverga University faculty and their families are told to go all to way to the Talagas.

The chess pieces are all fixed. The old man Enverga waited until the last hour of October 5 to slip his CoC hand carried by one factotum Zaldy Gariguez only to be driven away when the daughter of Bonbon Villasenor, Ayen, formally filed hers before the Comelec to challenge Mark in the congressional contest in the first district.

The Attempt to Convince Villasenor to Withdraw

The father and son were distraught no end and they moved heaven and hell to convince Ayen Villasenor to withdraw.

They went on a pilgrimage to the Department of Agriculture to power point their position: Mark precisely joined the LP coalition with an assurance that he will be running unopposed in his district as an auld lang syne to the graduating absentee solon. The Envergas were blaming the Alcalas that the latter are not doing their part of the bargain. “Wala ‘ata sa pulong, Procy…”The Envergas are quick in enforcing an agreement where they are at the receiving end, but where the breach is at their advantage, they break it with a straight face.

The Need for an Opponent

Faced with the urgency of the request from the father and son, Procy Alcala relented and instructed his son Irvin to plead with the patriarch of the Villasenors, the Mayor of Lucban. Bonbon however made out his closing argument by taking the cudgels of the first district mayors who fell from the Enverga grace: Dondi Silang,Dingdong Llamas, Romar Portes, and Naning Torres and a host of others who have sworn allegiance to the father and daughter Villasenor.

With no visible opponent, Bonbon argued with Irvin, Mark will saturate Tayabas, Lucban, Pagbilao, Sampaloc, Polillo, and the rest of the first district to depose the mayors who are oppose to him. The Envergas are not magnanimous in victory. They see to it that their political foes are annihilated never to rise again. With an opponent backed by a super majority of the mayors and the barangay captains, the Envergas took notice and lost some appetite at the dinner table.

Mark Enverga is no longer returning the calls of Irvin and the rest of the Alcalas. The young congressman sets the blame game on the Tanadas as the brain behind the run of Ayen against Mark. He is seen most of the time with JJ Suarez and his running mate, Shiela Talaga. The Alcalas are none a tad worried because in reality the first district is the bailiwick of Sam Nantes, the Assistant Secretary of the DILG, and candidate for Vice Governor. With the able heave-ho of Bonbon Villasenor, the LP has the first district in the cusp of its hands.

The Tanadas on the other hand point an accusatory finger at the Envergas as the patron of their formidable opponent in the fourth district, Dr. Helen Tan.

The Tanadas are wrong on that score. They have nothing to blame but themselves because they are the author of the entry of Dr. Tan. She thought the Tanadas are gentlemen schooled in the ways of the old palabra de honor. She was mistaken because it looks like the Tanadas now are no longer the Tanadas of old. Ask one Concepcion Chit Asis.

In the mean time the unholy alliance between the Alcalas and the Envergas are breaking up in two.