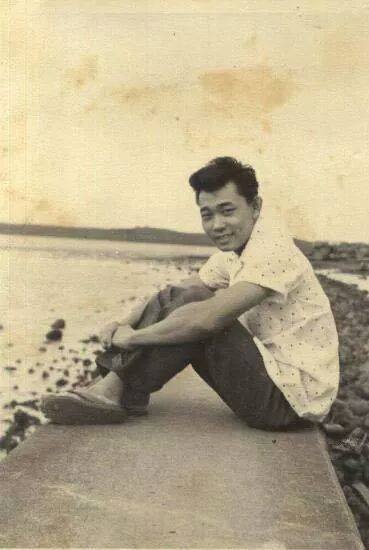 Ong Bong Jieng is a successful grain businessman in Calauag early on. By 1960 when he married a daughter of the town’s physician, he never looked back in his trading ventures. He was also the biggest copra dealer in town. His credit is legend that parents with substantial landholdings whose kids are college bound gravitate to him.

Not only had he sold rice and corn. He had the first grocery and hardware stores in the Lamon Bay area. By all indications, his strikingly beautiful wife, Nene, is his lucky partner.

While in Calauag he was a conspicuous philanthropist. He was a major contributor in the reconstruction of the Church of St. Peter Parish in the town. The image of St. Peter adorning the altar of the shrine was a singular gift of Ong Bon Jieng to the parish. When the church was demolished from its original structure that dates back to the 18th century, it was Ong Bon Jieng who provided the new church architecture that exists today: wide, cavernous, and modern.

While in Calauag, he was the first to acquire a brand new 1963 Plymouth Belvedere. This vehicle graced many a wedding free of charge as a bridal car.

In one balmy August morning in 1964, TV technicians were installing a gigantic television antenna atop the residence of the Chinaman. People trooped to his residence and queued for a chance to watch Pugo and Patsy in their blockbuster of a night time show. That was how generous the trader is. He made it a point to share his new gadgets that were never seen nor heard of yet by his cumprovincianos.

BoNing as he is popularly known simply was and to this day is glad to have provided entertainment or convenience to his kababayan without shelling out from his pocket. That was his difference.

One can borrow his instruments or gadgets but not his money unless it was a matter of life and death. He is known to be bighearted and not maramot when a townmate was in need of the use of his piece of equipment.

His house in the town is in the corner of the town plaza and closely adjacent to the church premises. Being a deeply religious man, he was in constant company of the cura parruco assisting the parish priest and a fixture in all religious or church activities when lay ministers as we know them today were still unheard of.

When martial law was declared the town was shaken to hear that Ong Bon Jieng was leaving the town for good entrusting his buildings and businesses to his brothers.

There were talks that the trader was visited by military personnel and rebels alike asking for some material favors. Fearing that he might be caught in the middle, the Chinaman gathered his young family and decided that it was time to leave Calauag.

Nobody knew where the businessman was heading. There were talks that he was bound for Naga in the Bicol region known to be a city tolerant of alien or non-Bicolano businessmen. Or even Legazpi in Albay where Chinese merchants prospered.

When the news of the uprooting of Ong Bon Jieng spread, the Batangueno businessmen in Calauag quietly rejoiced for they would soon take over the trades of the Chinaman. Many however were forlorn by the prospect of his departure especially the religious, the professionals, and the youth.

The trader was magnanimous in scholarships and sports events not to mention church affairs. The town was losing a reliable pillar. The thought of losing him proved traumatic as his customers had grown accustomed to where to obtain their daily merchandise. A change of routine requires a rewiring of a cultural habit.

The town of Calauag has known Ong Bon Jieng as provider of groceries, rice and corn, nails and GI sheets, and other myriad necessities packed and dispensed no less by the proprietor himself. Emergency credit is available to parents whose children need enrollment money.

BoNing’s small talk sans the yellow accent was therapeutic. His voice was a calming sound devoid of pretensions. His Tagalog is authentic. His wisdom is original. “Work is the most powerful prayer,” he would often exhort his friends and employs alike. “Work makes you lucky. Work is the highest worship. God instantaneously grants your request,” he intones with a wink.

Ong Bon Jieng does not profess to have an educated mind. He admits that he barely finished high school. His parents exposed him to the rudiments of getting started in business and he proved to be a good student.

Ong Bon Jieng for the longest time made himself scarce in the town. Talks persisted that one cause other the nocturnal visits of armed men was a misunderstanding with the parish priest on church funds.

There were rumors that the parish priest maintained a family in the next town and poured in money in a piggery. Ong Bon Jieng was never a confrontational man and people speculated that his best resolve was to leave rather than inquire on the destiny of his donations.