stories in my head….. 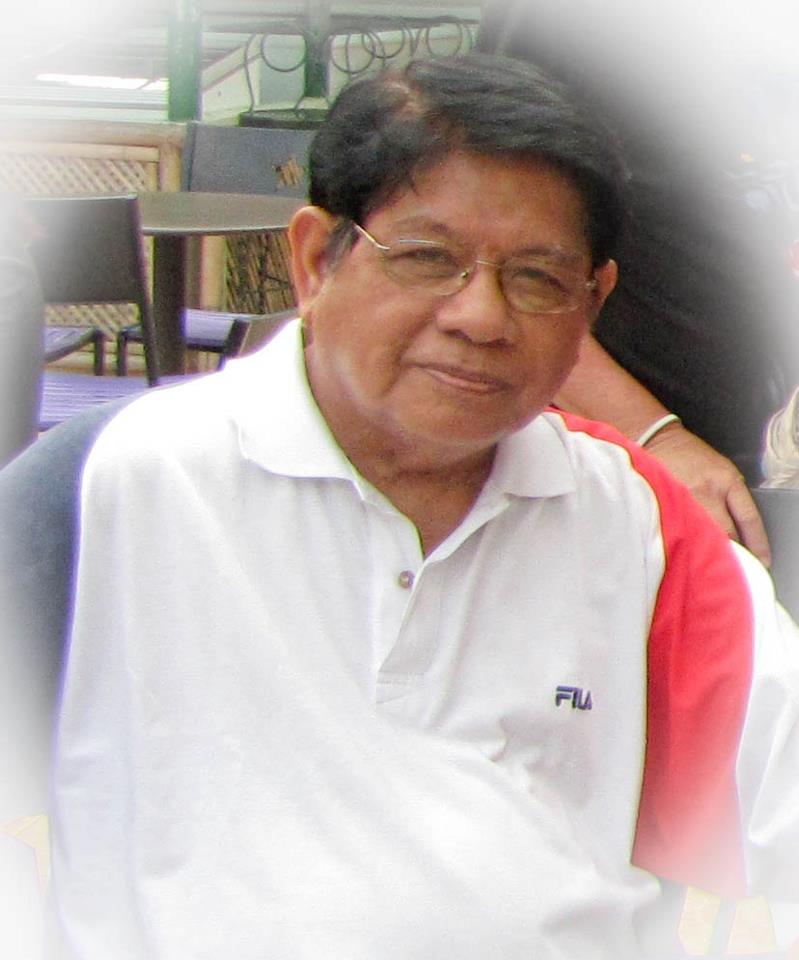 Our personal encounters were few and far between. The first one I recall was in the late 70s when he was a top honcho at Jolly Benitez’ Ministry of Human Settlements. I could not recall what we exactly talked about as I was there in the company of my friend Tony Kalaw of the Development Academy of the Philippines. While Tony K was busied up somewhere in the labyrinthine office along Buendia in Makati, I went up to his room to introduce myself and while coffee was being served we had that first conversation.

Of course his contemporaries are my uncles Felix and Teofilo and he didn’t know me from Amah. From across the table he said, “ah ikaw pala panganay ni Kuya Eno.” It was a long kumustahan, he was asking the latest of the cousins he had lost track for a long time.

But his building the Livelihood Center in Calauag tags in my memory. He said that he worked on the grant on the lot from the Ylagans and did some paper works from the Municipio of the then sitting Mayor Gardo Cabangon. The Consejo of Vice Mayor Tacio Ambas went along with his development template and was very supportive.

Since the MHS was headed by Mrs. Imelda Marcos, he said that this agency was well-funded. Pulling some strings with his Boss Jolly, he proudly said that he aligned some of the agency’s budget for the Livelihood Center and a lot more peripheral housing projects and employment programs that to this day are enjoyed by his eternally grateful kababayan.

It was from him where I heard the novel idea of local autonomy. From him, I also caught the term entrepreneurial spirit. He altered the architecture of his hometown and its traditional beliefs.

The Livelihood Center soon became a landmark of his provenance, Calauag, Quezon.

In one cold January morning in 1980 his late younger sibling, Robert Pula Arreuges, was having coffee with my father, a colleague in the town’s Court of First Instance. Kuya Pula as I called him was logging a state-of-the-art radio constantly blaring with Rogers and Oscar-Kilos hooked with the rest of what appeared a communications team.

Kuya Pula, sitting at the right side of Papa who was at the kabisera, broke the news that his elder brother was set to contest the mayoral seat of Calauag. I heard my father saying, “aba’y sa dami ng kamag-anak nati’y hindi pababayaan si Oti.” I was told by my Ina Fabia that Kuya Oti is a kamag-anak from the Leonidas-Leonor-Leopando side.

Oti, as he was called in his student days in Calauag Central College, later on, Joe to all his friends and Kuya Joe to his younger relations, was a fixture in Kanto Ariang. When I was in the elementary grades I always see him in the company of his barkada, the Philcars who counted as members Julio Lim, Louie Visorde, and Felix Pulgar.

Tito Honey, a younger brother of my father,  is a member of that famous gang who counted well-known professionals and businessmen of the town. I failed to ask my uncle how they came up with that name of a gang that sounds like a car dealership. I was told that Philcars was founded in the early 50s. They never fail to attend the annual Flores de Mayo and the Manga-Achara club anniversary balls. Its famous members looked like the matinee idols of the period. They dressed up like Elvis Presley and James Dean. Now I realized the familiar gait of the late Jimmy Valena who tried to mimic the gesticulations of Richard Burton. As for Kuya Joe, he was a better looking Erap sans the mustache.

Of course I am a generation removed from them as the gang of which I am familiar with is the Orchids of Jing Mendoza and Totoy Francia which rumbled around the town in the early 70s.

Kuya Joe ran alright in the shortest campaign period decreed by Martial Law with a shoe string campaign purse against the mighty machine of the longest sitting Alcalde of Calauag.

His miting de avance was well attended and the people in rapt attention listened to the candidate who vowed sweeping reforms in the Municipio. Joe won in the poblacion convincingly, but lost in the counting in the far-flung barrios of the town who have known Mayor Gardo as the only Alcalde of Calauag.

Kuya Joe went back to MHS and regularly visited his hometown keeping tabs of his various projects which all turned a success. With the death of Mayor Gardo in 1982, his friend Siote Lim ascended as the former’s successor.

With Kuya Joe’s retirement from the government, he was plucked by Mayor Siote as Administrator. It was during his stint as Mayor Lim’s trusted man that we had a number of personal conversations right in front of the Municipio with the late Konsehal Vito Ybarrola.

I learned later that he resigned as Administrator and flew to Canada with his family.  In one December 2009 evening, we met up with him together with Frank Villaflor and MagicAl Leonidas in one Chinese restaurant in Cubao. We vowed to meet regularly and start what he envisioned as some kind of Foundation or a Help Depot to extend assistance to less fortunate kababayan in Calauag. But the usual commitments of daily living sidetracked us from our covenant. But we burned our emails with kumustahan and a daily dose of jokes and inanities in government. But his well-laid plans for Calauag were caught on by the group of Mary Ann Entienza who organized the National Association of Calauagenians. Kuya Joe was a esteemed Director and Charter Member of the group. Later, NACS spun off The Young Professionals that conduct regular civic activities in the town benefiting indigent families. On regular occasions he was in the country the last of which was in early February 2011 when he attended an alumni homecoming of his old high school. He acted out with much gusto his role as Simon Cowell in CCC’s version of Calauag’s Got Talent.

Soon after, he went back to Canada. There might be a number of times that he came back to visit his children who stayed behind. I heard that he attended important milestones in the Seguerra Family and made himself flesh and blood in all the concerts of Aiza Seguerra, his niece, the daughter of another brother, Dick Arreuges.

A weather forecast in Calauag, courtesy of the the Weatherman Joe Arreuges

While abroad he created his popular blog, Calauag.com, and made it the forerunner of his Calauag Global on Facebook. His website is dedicated to his hometown and it chronicles the events in his beloved Calauag and the happy occasions of the individuals and families who cared to make their postings. He had listings of our natal days and anniversaries. He cataloged each class of his alma mater and announced reunions and home comings. Not to be accused of partiality, all schools have their own settings where anyone can upload anything. His blog is one broad Bulletin Board that proved useful to anyone outside of Calauag. He never failed to greet us on our birthdays. Kuya Joe welcomed them as it was what he wanted: to create a virtual Kanto Joe where we have our huntahan and kantiawan. He was never far, as he was just here, there, and very near. If he had his way, it could have been barikan at yagat na may kaamas pang natalups. In his Facebook page, one could hear his footsteps and if you are lucky, his chuckles. Or one could see in Kanto Ariang his silhouette sitting by his lonesome looking towards the direction of the Sea Wall. In his FB page he used his nom de plume Joe Arreuges. It is significant because it affirms the town’s peculiar ease at juxtaposing the Tagalog language only a native of Calauag can muster. Kuya Joe was a maestro of the lingo.

From Calauag.com he accumulated unbelievable followers and friends from all over the planet. He never fails to post comments, not just Likes, and in any raging discussions or just plain shout outs, he poured his wit. He had a hard drive on our birthdays festooning his greetings with templates only an artist could devise.

Calauag.com is an album of Calauag. It records a great slice of life of the town. While we do not have a regular newspaper that posterity can access, today or in the future, to get a glimpse of past events, Kuya Joe provided that need. He was looking at posterity right in the eye. He was compiling not only his thoughts of the moment, but his thoughts of the ages, as well.

On March 18 as I opened my PC at 4 am, I saw a numbing one liner from his son Noli Jose, “I lost my Dad.” I scrolled down and there I saw messages of sympathy from well meaning relations, friends, and town mates. I was about to send our family’s expression of grief as well but I opted to go to her sister’s (Pinky Mendoza) page to get some confirmation. There I saw some back and forth and she was telling Cezar (Balilo) that there was no cause of concern or hard feelings when Cezar made a premature expression of his family’s condolences to Kuya Joe’s passing as he was still being revived in the Coronary Care Unit. KJ’s son Raymond made an account of what looked like a valiant attempt to revive KJ and he proved to be, according to the doctor, a remarkable individual gifted with sturdy physical constitution. Raymond wrote, “Dad showed us last Sunday that he is still and willing to survive. He did the impossible by moving about and recognized our instructions. I never did feel bad if others have said their last wishes to us. It’s not your fault and we just laughed about that and said that I think that’s the reason why he came back.”

No Man is an Island

No man is an island,
Entire of itself.
Each is a piece of the continent,
A part of the main.
If a clod be washed away by the sea,
Europe is the less.
As well as if a promontory were.
As well as if a manor of thine own
Or of thine friend’s were.
Each man’s death diminishes me,
For I am involved in mankind.
Therefore, send not to know
For whom the bell tolls,
It tolls for thee.