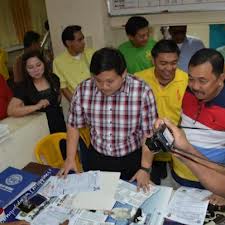 LUCENA CITY – The political bets for the top posts in Quezon province just get younger with the filing of candidacies of sons of political pros for the coming May 2012 polls.

Cong. Irvin Alcala, son of agriculture Sec. Proceso Alcala, and Samuel Nantes, only son of the late Quezon Gov. Rafael Nantes, filed their Certificates of Candidacy for governor and vice governor last Friday under the banner of the Liberal Party, accompanied by other partymates led by incumbent Vice Gov. Vicente ‘Kulit’ Alcala, after hearing a mass at the St. Jude Church in Bgy. Cotta here.

Alcala, 35, assured the local media that there will be no substitution of their candidacies with Sam, 25, as speculations continue that eventually his father, Sec. Alcala, will be the standard bearer of the LP in Quezon and lead the gubernatorial race against incumbent reelectionist Gov. David ‘Jayjay’ Suarez.

Sam, appointed DILG asst. sec.  by Pres. Aquino,  said the same vowing to continue the legacy of service left by his father who died in a helicopter crash barely 2 weeks after the May 2010 polls.

Months before, it was bruited about that Vice Gov. Alcala and Sam’s mother, PCSO director Betty, will lead the LP in Quezon, with the former being the LP provincial chairman, as most likely to be the standard bearer of the LP in Quezon, and the latter, his runningmate.

But the vice governor, underwent a kidney transplant operation early this year and the alleged uncertainty of his health condition prompted his younger brother, Sec. Alcala, to ask him to step back and run for 2nd Dist. Congressman instead.

The vice governor, who has been preparing for his gubernatorial run since their political rift with Gov.  Suarez last year, reluctantly yielded for his nephew.

Both the young Alcala and Nantes are up in the gubernatorial and vice gubernatorial fight against the 35 yr. old Suarez, (National Unity Party) and his runningmate, Shiela Talaga (United Nationalist Alliance), who surprised political observers here when she was the one who filed on Friday her COC for vice governor instead of her husband, 2nd District board member Romano Talaga.

Board Member Talaga – son of the incumbern Lucena city mayor  Ruby Talaga and ex-Mayor Ramon Talaga Jr. – who has long been widely reported to be gunning for vice gubernatorial post, opted not to run.

The young Suarez filed his own COC on Friday afternoon accompanied by his mother, Aleta, who decided to run anew for congress (Lakas) in Quezon’ 3rd District – Surez’ political bailiwick  – after the 3rd and last term of  Cong. Danilo Suarez, the House minority leader.

Mrs. Suarez is up against LP congressional bet, lawyer Shiela De Leon, and ex-governor Eduardo Rodriguez who is running as an independent.

In other congressional district races in Quezon, reelectionist Cong. Mark Enverga (NPC) is expected to breeze through with a congressional rival from the camp of out-going Lucban Mayor, Bonbon Villasenor in the 1st district; in the 2nd Dist., vice gov. Alcala will be up in a 4-cornered fight with 3 ladies, Mrs. Talaga (UNA), ex-congresswoman Lynnette Punzalan (Independent) and Keigoutina Suarez (Lakas); while in the 4th Dist., Wigberto Tañada Jr., son of his namesake father and brother to last termer Cong. Lorenzo ‘Erin’ Tañada III, is facing a  challenge from Dra. Angelina “Helen” Tan, wife of former 4th Dist. Quezon-DPWH chief Ronnel Tan. (Another congressional bet filed his CoC right on the dot on Friday, Oct. 5, 2012, from the Lapiang Manggawa, a native of Gumaca, Quezon and scion of the well-entrenched Tanada Family, businessman Alvin S. Tanada).