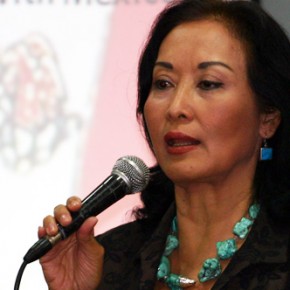 Literally translated in English it means “sourness retained” or “sour still”. The language switch however does not do justice to its real meaning. Sourness is synonymous with dourness. It conjures up an idea of acidity and therefore repulsive. Its free translation should be “sweetness retained” or “sweet still” and captures its sense in greater part. Paradoxically the free translation is the exact opposite. On the whole, the phrase means, from the point of view of the speaker, the addressee still retains a modicum of sexual appeal.

May Asim Pa is an appreciative phrase addressed to a middle-aged person usually the distaff side. In Tayabas, the ladies while under the influence liberally address their drinking male companions of any age, may asim pa, in the course of introducing them to the rest of the unfamiliar.

The expression is a double entendre. It may mean that something could still be done from a losing proposition. But this drift is seldom used. Its utility is more on the sense of the libido. The term evokes comical stab at some sexual possibilities between one or both middle-aged bed partners.

President Estrada on several occasions during his incumbency used the term descriptive of particular executive female personages who still possess physical charm. He used it in his various introductions of his Tourism Secretary, Gemma Cruz-Araneta in several events. His executive assistant Secretary Lenny de Jesus was also a recipient of the description. “In my company right now, Ladies and Gentlemen, is the Secretary of the DOT, a former beauty queen….may asim pa, ‘di ba?” No matter what the crowd category was, the interjection was a big hit. GCA was seen blushing, embarrassed by the brusque tag. The effect on the other recipient LdJ, however was markedly different. It was taken as a compliment.

Erap never used the phrase in describing his male functionaries, and for good reasons. Erap was a master of double entendres. His banters reeked with prurient drifts.

In one official visit to Quezon in August, 1998, the sitting governor narrated with unabashed gusto his close encounter with the former President, among his many other meetings with him. The former said that right after delivering his speech, the ex-President sat next to him and strung one tale after another, powered of course by JW Blue.

Erap’s best story, according to the sitting local official,  was the Japayukis where prior to and during the Second World War parents of Pinay maidens hid them from the Japanese. After the war, in contrast, the parents parade their daughters at the first sight of the Japs.

There were other stories galore courtesy of Erap on those occasions, like the Pinay Japayuki newly married to a Japanese. The latter, on their honeymoon, while stripping his spouse of what remains her garb kept exclaiming “Banzai!!” Finally, when he was about to make love with her and removing the towel off his waist, his wife exclaimed, “Bonsai!!”

Erap never talked about the social cost of migratory sex workers. The sitting governor, like an avid fan, was hugely amused by Erap’s stories, adding, “hindi Presidente ang dating, parang usapang barkada!” While the governor was introducing his female provincial personnel to Erap, the latter was winking at them, and with a haughty smile remarked, looking at the local official’s wife’s direction in quasi-secret sharing, “uy, Gob may asim pa sila!!” To the wheel-chair bound official, it was an affirmation of his manliness coming no less from the President of the Philippines. Within earshot, the wife muttered, “ay naku wala na pong ibuga!!” Throwing a furtive glance at the provincial FL, Erap nearly blurted out his legendary expression. Erap knew the predicament of the official since one in his inner circle updated him on the confidential section of the dossier of the local ally.

In April, 1998, we were scheduled to meet with Danding Cojuanco in his Balete mansion. Arriving there, we were made to wait in the sprawling reception patio where other local bets from all over were in animated chat. Soon our time came, and upon entering the well-appointed manor, we were led to a circular table where Ronnie Zamora and Melo Santiago were already seated. In the living room were Mrs. Cojuanco and Guia Gomez. While we were about to claim our respective chairs, in came the limping but smiling Erap, oblivious of his knee condition and apparently buoyed by gushing adrenaline as the surveys were unanimous that he was about to clinch the presidency. We were served Spartan snacks of chicken sandwich and fruit juice. Danding was an incredible host, self-effacing. I was addressing him as Ambassador. He demurred and requested that I could call him just Danding. But having that certain celebrity, and myself coming from a conservative Quezon family who values hierarchical deference, calling Danding by his first name was disrespectful and uncomfortable.

I had the luxury of sitting beside the would-be President. He was wearing his famous wrist-band. Erap’s physical attributes were indeed extra-ordinary validating the bruited about brawls that he was into, although he was in his late fifties then. His hands were incredibly big, those of a boxer’s. His wrists were broad and his arms were well-developed and had a hint of heft. He also sported that celebrated beer belly.  It was his gait that was an arthritis give away. I addressed him as Mr. President. He never objected.

The prime agenda of that meeting was campaign logistics in Quezon and of course statistics on Erap’s impending victory. Ed Angara was not there because the meeting was attended by the legal mind of Erap, Ronnie Zamora. Ronnie’s and Angara’s rift was legend. If that was a contest of grey matters, nobody knew. Basides, Angara was aware that the team of Eddie Rodriguez was rooting for GMA. Quezon was unofficially Erap-GMA in the 1998 presidential election. The other Erap gubernatorial candidate was a protégé of Angara and was touted to have contributed heavily in Angara’s campaign kitty.

Small talks preceded the meet. I heard Ronnie Zamora saying that he had a grand plan. He said on Erap’s inauguration, he should be assigned in the preparation of the incoming President’s speech. Ronnie said that the masa shall be invited as he acknowledged that majority of their support came from that base. Erap asked him how he’d do it. Zamora remained seated his torso nearly occupying two chairs, he began: “Maraming salamat sa inyong suporta,” waving his arms like some victorious Roman general entering the City of Rome. And while his hands were aloft added, “maraming salamat sa mga p….g i.a n’yong lahat!” This time he withdrew his arms on his nose and mouth making gestures of wiping them with spit and sputum. “Na habang kami’y nangangampanya, pinapahiran n’yo ng uhog at dura ang mga kamay n’yo bago kumamay sa amin, mga p….g i.a n’yong lahat!!”

I found it not funny, but I was civil enough to show some cutters. Even ex-Gov. Rodriguez didn’t find it funny either, pretending to be twiddling with his handphone.

Here’s the core group of a political party supposedly espousing the welfare of the unwashed yet in reality using them only as political circus props. Melo Santiago and the now sitting governor together with his factotum, an FPJ convert, bought the yarn out and out and let go fawning guffaws.

Erap, in fairness, wasn’t amused. He changed gear by waxing historic. Noticing that the delegation was from Quezon, he turned to me and asked, “alam mo ba kung sino ang gumawa ng kauna-unahang flyover?” Marcos was on my mind, but the group to a man gave up saying, “sirit, Mr. President!” Erap was quick, “Quezon!” Frankly, that was the first time I was about to hear that story about Quezon building the first flyover?

Erap was describing the excruciating let down Quezon experienced then. He said Quezon was cursing here and there apparently being in the midst of the seasonal rising up to the occasion, and the episode went kaput. Right after, Erap said, Quezon ordered the now defunct Bureau of Public Works to construct an elevated bridge across Altura, hence, the birth of the first flyover in Philippine history!

Men and women, who had the chance of occupying the presidential throne, or proximity to it, tend to be retrospective.

General de Villa, when he guested in one Quezon day celebration before the 1998 presidential poll, and right after the photo-op, tarried about on the bronze statue of Quezon in Perez Park. He marvelled at the colossal monument of MLQ made out of millions of post-war coins from all over the country. And he read with candid zeal Quezon’s metal engraved testaments. I heard him uttered, “the blueprint for greatness is all here…they are all here…why does nobody listen?”

Erap, the former president, speaks from his detention. The opposition, fragmented as it is, patronizes him. While he exists, the hodgepodge opposition does not recognize him as the galvanizing flame. The same is true with the administration. The administration’s deferment to him is nothing but an empty gesture of an attempt on appeal for unity. Erap is now reduced to a scarecrow. Aptly, using his favourite phrase and talking on the other sense, we ask, may asim pa ba si Erap?

(postscript: Why  was I at Danding’s on that date? I was the vice-gubernatorial candidate of the Lapian ng Malayang Masang Pilipino in May, 1998 elections. Right after the meeting, we went to the house of LMMP’s National Treasurer Manny Zamora, Ronnie’s brother, in Greenhills, where he parlayed Quezon’s logistics for the elections’ home stretch. Manny Zamora gave the gubernatorial candidate the entire budget of the party in Quezon plus the congressional candidates at P5M each. What happened to the funds remained unaccounted for. Sources close to Erap claim that right after the elections Erap distributed bonuses (sourced from excess contributions) to select allies, one of them the victorious gubernatorial candidate who received P20M. This explains his political preference. With that logistical track record, his mindset was an FPJ redux. When the opposite appeared in the offing, he tried Ping camp. Again, on the homestretch, he sent word to GMA that he was ready to jump ship. He was rebuffed. Feeling dejected, he went all out to bury GMA in Quezon.)