AN OPEN LETTER TO DUTERTE OF THE PEOPLE 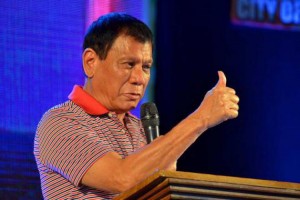 “In a little while from now,” as one popular song goes, you’ll take your oath of office as President and you’ll be on top of the world.

You were never in the vicinity of the Commission on Elections building in Intramuros. There was one Martin Badulis Dino who filed his Certificate of Candidacy for President under the PDP-Laban banner. People waited for you until the Comelec’s door shut everybody out.

You were in Davao facing the media telling them in no uncertain terms, “I would like to assure Binay, Poe and Roxas, sa kanila na yan!” Your reasons? “Matanda na ako, wala ako pera, at ayaw ng pamilya ko.”

A great number of people were disappointed. Those who lined up at the MRT for hours and the victims of petty crimes gnashed their teeth in desperation. No savior is going to deliver them from the neglect or indifference of government.

Twelve months before October however you tested the waters on where you stand as a presidential contender. You know that a great number of your people are looking for a leader who has a new perspective. Davao City is your vaunted Petri Dish. As Mayor of Davao, people know whereof you speak. You identified with all 100 million of us: the city dwellers, vendors, drivers, barkers, youth, farmers, fishermen, call center employees, contractuals etc.

Jejomar Binay mistakenly called us 100 million pesos. Grace Poe looked at us as nostalgic audience while Mar Roxas viewed us nothing but numbers and statistics.

Your genius felt how our mind works and our idiosyncrasies kick.

You barnstormed, according to your Bong Go, first in Albay in the Bicol region and Surigao in Northern Mindanao. You mouthed what you believed as the upside of Federalism, a radical idea of local self-rule much broader than local autonomy which you enforced since the advent of Local Government Code.

Ideology or policy of governance is best tested in the crucible of experience as Francis Fukuyama taught.

As Mayor of Davao, you knew the limitation of a City Mayor notwithstanding the vast resources of the city government. Yet you soldiered on until the City of Davao was adjudged as one of the safest cities in the world. Everybody took notice even the Man from Makati who knowingly ignored your accomplishment perhaps rightly so, because he ruled the richest local government in the country with sister cityhood pacts with other less fortunate LGUs.

The initial surveys show that you were a one-digit tail ender condescendingly disparaged by national figures like Grace, Miriam, and Mar.

Malacanang did not pay attention to your orientation engagements all over the archipelago lecturing on the merits of Federalism.

Bong Go of all people has the epiphany. He said people like flies were attracted to Rodrigo Duterte’s rallies not because they were interested in understanding what Federalism is all about but who exactly Rodrigo Duterte is.

Bong Go confided that his group soon realized that people are interested in the person and not in the idea. Soon they realized that only Duterte can beat the frontrunner Binay.

But you never lifted a butt to file your presidential CoC. Instead at the last minute, you said you wanted to be Mayor again of Davao City easing out Inday Sarah.

Luzon and the Visayas were dumbfounded. People wept in the streets. Mindanao lost a chance to send a son to the Palace. The common man shook in desperation in the crowded MRT stations.

We saw people in Davao, the vendors, school teachers, students, fisher folks bursting in tears as if you betrayed them.

But in one December morning, through your lawyer, you finally replaced Dino. The man on the street silently rejoiced. 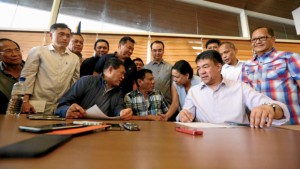 I never saw Manny Villar in your humble house in Matina. Or Gibo Teodoro or Pantaleon Alvarez or Ed Angara or Danny Suarez or the factotums of GMA or Imelda Marcos egging you to get on with your act and quit the zarzuela.

These people have their own ostensibly financed slates. They were seen atop the stage with Binay in the case of Danny Suarez or Grace Poe in the case of Joey Salceda. Wilbur LeGette famously said, “The purpose of any political organization is to get money from the gamblers…”

Suarez was heard saying, “boboto ba kayo sa isang mamatay tao?” Salceda on the other hand harangued the Bicolanos that he switched allegiance from Mar to Grace because he said Mar failed on his promises and he has to guide his people by voting right, away from “Dudirty.” 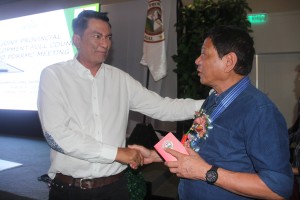 These politicians personified the ugly and unprincipled demagogues. No palabra de honor. No delicadeza. If capital punishment is to be resurrected, these specimens should be the first to hang.

All they wanted is to survive like famished dogs in the next six years. They have the money, organization, and sporting the honorific titles: Honorable. These lowlifes abandoned their behemoths, swam, and scampered aboard the Davao Cutter. Can this Duterte Cutter sustain the weight of these detritus?

Mr. President, you confessed that the election Kristos began redirecting their bets towards you by the last and third debate in Dagupan, Pangasinan. By the first confrontation in Cagayan de Oro, you were behind in political ads. By the second, you just get by. But by the last, you were the Man to Beat. People by then know that you were ahead by a mile.

Late in the day one Baler DAP suspect announced his party’s affiliation with you, Mr. President. The Zubiris claim neighborliness. The Remullas, by affinity.

These dregs were nowhere near you in the first 200 days. They look down on you as a Humbug, a local thug, a presumptuous local politician who never broke into national consciousness. To them, you were just like the local Barakos: Chavit of Ilocos, Hagedorn of Palawan, Sanchez of Batangas, etc. who never won in their Senate try. Now, they ostentatiously broke bread with you.

Mr. President, at 71, you are the oldest in recent history to be elected to the Presidency. We are not saying that you have reached the sunset of your life or your health precariously hangs in the balance. With medical breakthroughs, you claim to be fit as a fiddle where you rise up to the occasion as you often brag.

But life is fragile, Mr. President.

Do we sense triumphalism in your pronouncements? Or hubris, a predilection suffered by lesser mortals? You are a student of history as we all are having seen the carousel of Presidents since FM or Cory.

You don’t give us the impression that the “world began when you were born.” Life begins at 40, some wags say. Others say at 71, one becomes a messiah.

On the contrary, we can sense that you are a meditative leader. You are a listener not a midnight monologuer, or whatever that means.

Mr. President, we know that you are there in your Davao Enclave enjoying every minute of it not because of the Villars, the Marcoses, the Arroyos, the Ramoses, the Angaras, the local scums, your classmates at the San Beda Law School or fraternity brothers, or barkada, or kababayan.

You are there because of us, the simple folks, who lined up the streets to see you with clinched fist waving at you with a tattered sack for a streamer with your name on it emblazoned in red.