Our Elections are a Joke 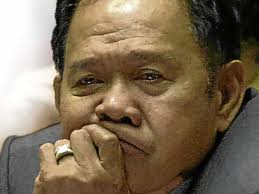 “The list of groups seeking congressional seats gets stranger and more absurd every election season, making the party-list system a joke, according to Commission on Elections (Comelec) Chairman Sixto Brillantes Jr.

“A quick look at the Comelec’s list of the groups shows that health promoters, aviation advocates, athletes and hobbyists, entrepreneurs, former drug users, ex-military renegades, school dropouts and even foreign-exchange dealers want to run for seats in the House of Representatives that the Constitution reserves for marginalized and underrepresented sectors.

“In a review of party-list groups, the election watchdog Kontra Daya cited, among many other groups,  Ang Mata’y Alagaan (AMA), a group that claims to represent blind indigents and people afflicted with all kinds of eye diseases and disorders but whose nominees belong to the well-connected Velasco family.

“The Velascos are very powerful politically and economically, considering that they have as head of the family a sitting member of the highest court of this country,” Kontra Daya said.”

“(Commissioner Rene) Sarmiento referred to documents provided by Kontra Daya, one of which showed Rep. Catalina Bagasina of the Association of Labor and Employees as the “richest party-list solon” with a net worth of P133.938 million, based on her statement of assets and liabilities for 2011.

“Is the Senate big enough to contain the mammoth egos of the feuding sons of deposed President and convicted plunderer Joseph Estrada?

“If all goes according to the Estrada game plan, San Juan Rep. Jose Victor “JV” Ejercito will join his half-brother, Sen. Jose “Jinggoy” Estrada, in a chamber that has a history of close relations serving simultaneously—at no great bother to the Filipino voter.

“Ejercito, the ex-president’s son by his mistress, ex-starlet and now San Juan Mayor Guia Gomez, is on the senatorial ticket of the United Nationalist Alliance (UNA). To boost his chances, Ejercito is dropping his surname and will be using “Estrada,” the screen name of his wildly popular ex-movie star father.

“Should he win, Ejercito will be sharing the Senate for three years with his half-brother, Jinggoy, the Senate president pro tempore whose six-year term will not end until 2016. Jinggoy is Estrada’s son by his wife, Loi Ejercito, the ex-senator.

“The father on Friday downplayed the prospect that his two sons could play out their sibling rivalry on the Senate floor. He said he had gotten their “commitment” to work together and set aside personal differences.

“I told them, go ahead, fight, if you want to hasten your father’s demise,” the 75-year-old Estrada said in Filipino.

“Members of the same family serving in the Senate will not be a first in the case of Estrada’s two sons. There is the example of Alan Peter Cayetano, the minority leader, and his older sister, Pia Cayetano. Jinggoy also served in the Senate at the same time as his mother, Loi.

“Nancy Binay, a daughter of Vice President Jejomar Binay, has yet to decide if she will run for the Senate in 2013.

“Binay, who is also the current deputy secretary-general of the United Nationalist Alliance (UNA), said she has discussed with her father possible scenarios in next year’s elections. She said she is inclined to follow whatever the party decides.

“My father, we’ve discussed advantages and disadvantages. He left it with me [to decide]…I’m at the stage whether I will decide whether to run or not…But at the end of the day, if the party needs me, I have to follow what the party decides.”

“Senator Ramon “Bong” Revilla Jr. and his wife Cavite Rep. Lani Mercado thanked actress Jodi Sta. Maria for providing “inspiration” for their son, actor-politician Jolo Revilla, amid preparations for his vice-gubernatorial bid in the upcoming elections. “Thank you very much sa kanya, sa kanyang pagtulong din kay Jolo bilang isang inspirasyon,” Mercado said, referring to actress Sta. Maria. In recent weeks, Sta. Maria has been rumored to be in a relationship with Jolo, and even referred to the young Revilla as “someone special” early this month on the entertainment talk show “The Buzz.” Referring to the interview, Mercado told ABS-CBN News: “She said something personal about them, so natutuwa naman ako na she’s there to support Jolo.” Following in his parents footsteps, Jolo is running as vice-governor in his native Cavite in the upcoming 2013 mid-term elections. For his part, Sen. Revilla said Sta. Maria’s support for his son leading up to the elections is “welcome.”

“LRay, estranged from his father since the 2007 elections, also publicly clashed with his father as the governor vigorously opposed the move of LRV, Arroyo and Rep. Rolando Andaya Jr. and Deputy Speaker Arnulfo Fuentebella to split Camarines Sur into two provinces.

“LRV publicly endorsed Arroyo on April 5 before a huge crowd in Barangay (village) Salingogon in Minalabac town, asking them to give the latter 98 percent of their votes.

“Accompanied by Arroyo in his barangay visit that day, LRV described his son LRay as an “ingrate,” “paratomang (disrespectful, disobedient to the parents)” and an “embarrassment to the family” and discouraged the village crowd from voting for his son, that he said ironically is his junior.

“He also asked the crowd not to support his grandson Miguel, the 23-year-old son of LRay whom the latter has been grooming to replace him as governor in 2013. He announced that he would be making a comeback as governor of the province. Like outgoing governor LRay, LRV is also serving his last term as congressman of the third district.”

“Davao City Vice Mayor Rodrigo Duterte has given hint he and children Mayor Sara Duterte and city councilor Paolo Duterte may run for the city’s top posts in next year’s polls, but doused speculations he was building a political dynasty.  Duterte, in the Give Us This Day television program on ACQ Network aired Wednesday night, said he sees nothing wrong with three Dutertes running, saying families running together in elections is a reality voters must have to face in the Philippine political setting. He said, in the program hosted by Pastor Apollo C. Quiboloy, head of The Kingdom of Jesus Christ The Name Above Every Name, that there is democracy in Davao City and if he and children run together, he would not “bully voters into voting” for the Dutertes. The question is: Are the Dabawenyos ready for three Dutertes? he said in the late night television program. But Duterte said the three of them running, and the positions they would run for, is up for decision by the Hugpong sa Tawong Lungsod, Hugpong is the home-grown political bloc founded by the vice mayor.

“Speculations are that Duterte would be returning to the top City Hall post he held for 18 years, Mayor Sara running in the First District congressional race and councilor Duterte taking a crack at the vice mayorship. In the other side of the political fence, talks are that former House Speaker Prospero Nograles is staging a comeback to run for Congress against Mayor Sara Duterte, with son incumbent congressman Karlo Nograles running for vice mayor against councilor Duterte. Nograles was miserably beaten by Mayor Duterte by more than 200,000 votes in the mayoral race in the 2010 elections. Duterte said he and children running together is not unique in Davao City, saying that political arch-rival Nograles could have built a “political dynasty” had fate been kind to him.”