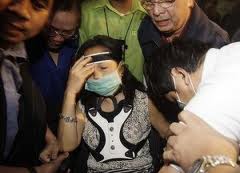 Sedated, and before he lapsed into induced coma, Ferdinand Marcos ordered the Sikorsky pilot to bring him to Paoay. His genius told him that with him in his hometown he is assured of an iron vault fortification.

The vaunted Ilocano allegiance comes into play and the dictator can buy his time. With him ensconced in the Malacanang of the North, he knew that he can bring with him his New Society government and perhaps bargain with the new Yellow leadership.

The haggle may of course take the form of immunity or swift compromise on ill-gotten wealth where a substantial piece of it is retained by his family for his peace of mind. He didn’t have to worry whether Bonget has his source of livelihood into the future.

That wracked the brains out of the late dictator. He didn’t want his family exposed to endless litigation or worse execution. As a lawyer and being conscious of history, he knew that a revolution can create mischief like extra-judicial execution ala Russian Czar Nicolas II and his family. What he dreaded most was not conviction by some hasty convened tribunals like what he did with Ninoy Aquino but the obliteration of his family or to being consigned to oblivion or to earning a notch in Philippine history as the most rapacious family who robbed this country blind.

In it he is assured of all imaginable protection and moral support. With his new Republic in Batac, he knew he can strike a deal with the Yellow Army of Cory Aquino.

In this country, everybody’s a prophet in his hometown. A hometown provides recognition and appreciation. To a Pinoy, his hometown is his own last refuge.

To Marcos, his mastery of the Ilocano dialect can send followers in frenzy, unlike his children who can only manage a smattering of the Northern tongue like Wen, Nakermet, and Awan ti Datung and in British accent at that.

Marcos Ilocano kins are willing Kevlar vests for the dictator. Or he can move around, like Saddam Hussein, and be lost in the vastness of Pagudpud or the peripheries of the Caraballos and Allacapan. As Apo Marcos, he created the myth of the great Ilocano Datu finger-tracing on any Philippine map at his profile etched at the centre of Luzon, from Abra to Kalinga to Benguet.

It was different with Erap Estrada’s San Juan

San Juan has no diehard tribal kins. Erap can only count loyalty from the city dwellers whom he relocated in Tanay.

Marcos’ cumprovincianos however are more than blood relations. His legend began upon his acquittal in the murder of Julio Nalundasan. From there, Marcos career was meteoric capped by his capture of Malacanang like iguinuhit ng tadhana.

Erap’s legend is on celluloid, a second-rate understudy of Rogelio de la Rosa. While he eschewed exile as proposed by Nani Perez and stayed in San Juan, his hometown refuge did not offer any protection. In fact, he became vulnerable because of its proximity to the centers of power in this country. Soon enough, his hakot crowd dispersed and when General Ebdane’s arresting team entered Polk Street, Jinggoy was likewise hauled off to V. Luna. San Juan was not the Intramuros that Erap envisioned.

In the May 1998 presidential elections, FVR knew the figures before hand that Erap would trounce his protégé, Joe de Venecia.

While the surveys showed that JdV was trailing behind the movie actor, FVR had a secret plan: corral the votes of Pangasinan. The modus was to await the results from the big regions. Once the tallies were out, spring the bottomlines from Maguindanao, Lanao, and of course his hometown Pangasinan.

There’s no problem with Maguindanao and Lanao because these two territories traditionally offered the last five digits and may affect the presidential votes and the last three slots of the 12 winning senators without much hullabaloo.

With Pangasinan, it would be different because after all, JdV and his patron FVR are natives of this province. Maybe JdV really won in Pangasinan, just like FVR in 1992. A million votes over that of Erap was politically palatable. Lakas Treasurer Tony Villar bragged that all they need was one vote to win the presidency. They could take care of the protests by the losers afterwards.

With these two stalwarts in tandem, they can deliver the province convincingly decimating the likes of Erap and Renato de Villa.

What we are saying is that even FVR has his hometown refuge, Pangasinan, which he harnessed almost convincingly to enthrone his understudy in the Presidency. But they were buried by the Erap avalanche of four million votes over JdV. A couple of millions snatched from the ARMM and Pangasinan unfortunately was inadequate to spade the mounting lead of Erap. Upon learning the figures from the Exit Polls, JdV’s face turned ashen. It was the end of their posturing in Lingayen. Erap did not bother to know the Pangasinan results. JdV conceded. FVR painfully retreated and the denial was soon over because he now realized that he was indeed a lameduck president.

With JdV in Malacanang, FVR knew that his political stars had not dimmed. JdV was his ticket to his political resurrection via the overhaul of the Constitution by installing a parliamentary form of government. FVR failed with his expensive initiative thwarted by no less than his erstwhile legal counsel, Justice Antonio Carpio. We had no inkling why these two bosom buddies drifted apart. Justice Carpio taught FVR the rudiments of the law when the former methodically disembowelled the valedictory PEA- AMARI COASTAL BAY DEVELOPMENT CORPORATION contract by declaring the Amended Joint Venture Agreement between PEA and Amari “NULL and VOID ab initio” with nary a dissent from the 15-man Supreme Court. What caused their irreparable separation? We all know the reasons why the Firm called it quits with the First Gentleman. But with Ramos, we had no luxury of the source of leaked conversations between him and the former Atty. Carpio.

Deprived of the windfall from the dying minutes of his administration, our local Charles de Gaulle repaired to the land of the Pangalatok to try his political brew. Unsuccessful, he played escort to Erap on the way to Barasoain Church.

The press had a heyday counting the number of visits GMA had in the second congressional district of Pampanga. Were GMA an ordinary candidate, her 50th visit would not have been uneventful. But she is the President. The entire bureaucracy is under her command. She is still in dire denial that her extended term of more than 9 years is coming to an end.

The Charter Change campaign has been shelved because after all this tack has already wired her opponents without even using grey matters to block it in every which way. The countdown to the deadline of the filing of Certificates of Candidacies kept her opponents on tenterhooks. A run for Congress is the best passport to blindside her political foes.

There is no doubt that GMA is made of sterner stuff. She has learned all the tricks in the Dirt Department. She saw the pain in her Diosdado’s face on the eve of Marcos inauguration. She knew that Diosdado was naïve and was in the league of Sergio Osmena when both practically did not touch the resources of the government in their reelection.

Now however is a different clime and time. Getting mad is no longer fashionable. The best revenge is not only to be happy but to get even. Her Supreme Court protégés have already delivered their payments in the form of the conversion from common shares to preferred shares the Coco levy funds in the hands of San Miguel Corporation and divesting in the process the right to vote these shares; the non-resignation of appointive officials upon filing of their CoCs; and the lifting of premature campaigning effectively favoring unresigned appointive government officials who declared their candidacies and moneyed candidates. In all likelihood, any disqualification case against GMA won’t prosper because these prior  pronouncements tilted the scale in her favour.

Just like Marcos who longed to die in Paoay with his boots on, or Erap who thought he had his loyal human barricade in San Juan, or FVR who relied on Pangasinan’s commandeered votes to bamboozle a JdV presidential victory, GMA is banking on her cabalen as their newly minted congresswoman in July, 2010. Who knows, she might be successful unlike her predecessors. As the deputada of Pampanga, her new designation might be the non-expiring passport to Prime Ministership well into the future. Not to mention how she grates on the sensibilities of the new President and his soulmates. With Martial Law declared to boot, the sitting president still holds tightly the roadmap of her government for the next ten years.