There’s talk on the street; it sounds so familiar
Great expectations, everybody’s watching you
People you meet, they all seem to know you
Even your old friends treat you
like you’re something new 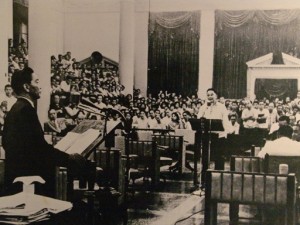 We have now an interesting composition of the Senate. Gradually we are exorcising ourselves with deadwoods content only in the enjoyment of our subsidy. With the entry of young blood in the Senate halls, it now becomes a truly distillation chamber of significant second opinion.

It was Frank Drilon who said that the Senate was invented to afford us plain mortals second opinion. Without the cumbersome filtering of the Senate, we become easy prey to scheming predators in the other chambers. After all we are a democracy. The clash of viewpoints all the more strengthens our institutions. And hopefully at the end of any excruciating day, we protect our coffers.

The exchanges in the Senate now are worth our time. At one end of the spectrum are the veterans, specimen of two generations past. Johnny Enrile, Nene Pimentel, Ed Angara, and Joker Arroyo are relics of martial law. Jinggoy Estrada, Ramon Revilla, Jr. and Lito Lapid are endangered species of the foregone and unlamented era of blind voting. The rest, Ping Lacson, Loren Legarda, Manny Villar, and Dick Gordon are the traditional ambitious politicians out to claim political turfs on account of seniority.

Early on, JPE was reported to shy away from babysitting Lito Lapid who demanded translation of the Senate Rules in Kapampangan. The former brushed off the unwritten request of going easy with the novices in their maiden foray on the floor. The lawyer in the old man declared that the competence of an elected senator is juris et de jure. “Sori na lang kung nagmukha kang cochero sa Senate floor!” was his parting shot.

The Young Turks: Peter and Pia Cayetano, Migz Zubiri, Noynoy Aquino, Chiz Escudero, and Sonny Trillanes are the offsprings of the revolutions. Mar Roxas belongs with distinction to this group. While these wet in the ears are into sizing up each other and initially made tentative groupings, they have fundamental differences in ideology or upbringing.

We are into peering their unique, albeit predictable, perspectives.

His other partners foremost of whom was Mike Defensor got skewered in the last elections. Andaya remains in the Cabinet, doing a wait-and-see. His late father Rolando, Sr. got clobbered in the 1998 senatorial elections. Rick Sandoval got licked by Toby Tiongco in the Navotas City mayoral race. Robert Ace Barbers ran for Governor of his hometown province Surigao del Norte and was successful. He was heard spewing venom towards the First Couple who apparently did not flex enough muscle in pulling up his late father, Bobby, in the magic twelve in 2004. We have Nani Braganza benching successive appointments in the Cabinet. Eventually he resigned and comforted himself with a local post in his hometown Alaminos City in Pangasinan.

Truth to tell, we owe it to the Spice Boys who added color in the otherwise drab impeachment of Erap in the dying days of 2000. They showed us their true mettle when they stood up at the right time and at the right place. Few are given the opportunity to grab a ripe and apt advocacy. The Erap days were dark and gloomy. The people were at deja vu not different from the atmosphere of the Ninoy Murder. The Spice Boys glamours all stuck their collective necks against the rampaging masa of Erap. That was six years ago. Soon Mike Defensor was recruited as the favorite political mechanic of the new president. In the 2004 presidential elections he carried a simple notebook bearing the hourly schedule of the now Chief Executive. It was he who fixed her itinerary. The other members of the Spice cast manned strategic posts in the new government.

With the unforgiving political evolution and the shifting public opinion, the new tenant of the Palace faced sporadic revolt that did not mature into a full blown third sequel people power. Her loyal court however, providing exhaust valves, got the beating. The Genuinos, Ermitas, Bert Gonzaleses were driven out of their turfs. Migz Zubiri hangs by the coattails and whose proclamation was shadowed by the protest of Koko Pimentel.

Of course Chiz has his own misjudgments. His association with Danding may in the near future be used against him. When he spearheaded the unthinking impeachment case against the Former Chief Justice Hilario Davide, the activist media waited in ambush. His emotional reaction betrayed himself: he was affected by the label.

Escudero, while looking fresh and exciting, is not the ideal representative of new leadership. As the legal point man in the Davide impeachment, he showed myopic view. He allowed himself to be used by a confectionary character out to exact revenge from an intractable jurist. The trompe-l’oeil was not cheap. His role in the sacking try assured the cost of his second term in the House. His connection with Danding is formalized by his link in the other wing of the Nationalist People’s Coalition.

Chiz striking association with Marcos personalities is to be resurrected once the opportunity arises. It was a mistake and he knew it, but he understated his potential. He thought that being a congressman of his father’s district was just a rite of passage. Thereafter, he thought he is going back to private practice. But each one of us has his own epiphany.

THE PLUS OF YOUTH

Galvanized by the overwhelming people’s support last May 2007 elections, these newcomers pose a threat to the leadership or the ambitious in the Senate.

We see the attractiveness of youth. Youth and vitality is worth one billion pesos in electoral logistics. They are computer savvies. They are the children of the YouTube and the facility of the internet. The traditional media hound them for reactions insuring patronage among the young audience. The likes of the old breed were habitué of the great halls of the UP Library, no doubt about. Whereas the newly minted gladiators eat and drink instant knowledge from Google, Wikipedia, and myriad other search engines. While young chronologically, in terms of imbibed knowledge they are comparable to the magi. And they inhaled. Whereas, the tantrums of Johnny, the grunts of Nene, the ex cathedras of Joker, the smirks of Ping, the grimaces of Jamby, the eye rolls of Loren and the pedantic spiels of Miriam, are all consigned to Geriatrics. Oscar Wilde famously said, “My experience is that as soon as people are old enough to know better, they don’t know anything at all.”

We devour anything Chiz says, or the ramblings or rants of Trillanes or Peter Alan. The latter prevailed notwithstanding the clock-work demolition job against his candidacy. Mar Roxas, we can depend on his palengkenomics and innate old school philosophy. Legal niceties or constitutional hairsplitting, we have Peter Alan, Pia, and of course Chiz. General approach to agriculture, finance, technology or economics? Migz or Noynoy can take care of them. One doesn’t confuse Sonny Trillanes on anything about the Armed Forces or peace and order. Remember too that, for the first time, we have two bachelors in that chamber.

Give these wizards a little more than six months and they emerge like Goliaths in their fields.

It was pathetic for Miriam to display annoyance on the firm and concise interpellations of Chiz last week. Miriam still harbors (or appears to harbor) that antiquated academic arrogance displayed by UP professors towards their wards. She tried, to no avail, to humiliate the young senator on the Senate floor. To Miriam this is the perfect pitch to get even for the disgrace her nephew suffered last elections. Mike Defensor, as reports disclose, was the biggest election spender clocking near the P200M mark. Butch Pichay was heard protesting in the ranking, claiming with the way he was butchered by the media based on unofficial receipts, he was the top wastrel.

During the maiden encounter, Enrile and Gordon and Angara were in full attention, quit their hand phones twiddling, and waited for a gaff somewhere from the neophyte legislator. They knew that the cameras were rolling and the media got hooked on the historic baptism, and any slip is recorded in eternity ready to be down or uploaded at an opportune time. Gordon, in case one forgets casts a moist eye on the presidency. From this batch emerges the next man in horse back.

The Senate bullies know that their battery life is in near end. Browbeating this mélange coterie of newcomers, the bullies only hasten their political funeral. The better view is to align with them and pray for political resurrection.