THE INDEPENDENCE OF PAQUITO OCHOA 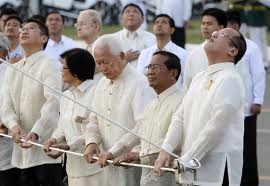 Twenty four months into the first term of the sitting President, visible cracks have formed between the Office of the Executive Secretary and the Liberal Party. It is now out and out war between the political party of the President where he sits as its Chairman Emeritus and his ES.

Its occupant, the reticent Secretary Paquito Ochoa Jr. has a long memory and by each passing day he takes into account the insults and the contempt he suffered at the hands of the top honchos of the LP.

With every passing day and into the midterm elections, the ES has entrenched himself within the psyche and confidence of the sitting President. He has made it known that he has his own agenda separate from his patron.

The Balay of Mar Roxas and the Samar Mansion of ES represent the opposite poles of the President’s tightrope walk. In the beginning, there was One Balay only where Mar Roxas and his wise guys call the shots.

There was one encounter where Ochoa stubbornly refused to modify his presidential candidate’s itineraries to accommodate his running mate Roxas where Mar in a moment of pique was heard saying, “kung napapa-ikot mo si Sonny Belmonte dito sa Quezon City, ibahin mo ako.” Roxas, undoubtedly buoyed by unshakeable survey ratings, felt he had the right to steer the campaign at his discretion. Ochoa and his Ateneo crew resented the imposition. The latter chose to abandon their station in Balay and set up a ragtag headquarters in Samar Avenue. Ochoa’s brother-in-law Jerry Acuzar plunked in his initial investment of P30M. Thus started the independence of Paquito Ochoa Jr.

Ochoa has the enviable access and trust of the sitting President.

First, they all started as childhood playmates while their fathers, politicians both, were deep in political chatter Ninoy as governor and former Mayor of Concepcion, and Paquito Sr as Mayor of Pulilan in Bulacan. Of course we don’t have to mention the sitting President’s old man as the quintessential politician from Tarlac, its erstwhile governor, a kingdom a stone’s throw north of Bulacan wedged only by the miniscule province of Pampanga.

Legends have it that simultaneously with the historic bombing of Plaza Miranda in September 1971, the bosom buddies Mayor Paquito Sr and Senator Benigno Jr were into a drinking binge in Pulilan. Given the old fashioned political fence mending, Ninoy was in Pulilan humoring an old political ally who has made it all known that he was nursing some resentment or tampo  for being left out from the radar of the then rising political star from Tarlac, the youngest senator controversially elected in 1967. “Mula ng maging Senador ka, parang kinalimutan mo na ako!” Assuaging his friend’s wounded feelings, Ninoy visited the old man Ochoa as a surprise birthday gift.

The Pulilan Mayor, per running accounts, was in tears on seeing his old friend Ninoy, by then a formidable national figure and touted to be the next big gun of the LP as its presidential standard bearer in 1973. Hard drinks were brought out apt for the occasion as a reunion of long lost friends. Ninoy early on was reminding his chief of staff to lay the predicate of saying adieu at around 7 pm just in time for his speaking engagement in Plaza Miranda as the LP was then having its proclamacion in the historic venue attended by all the big guns of LP, the then opposition party. His visit, Ninot thought, was enough to placate his loyal Bulacan political leader.

Ninoy’s Man-Friday for the nth time sounded the scripted goodbyes as he was expected at Plaza Miranda to deliver the usual bombas, but his long time amigo was all over the young senator who was inebriated as well, whispering, “kung mahal mo ako, wag mo muna akong iiwan ngayong gabi.”

True enough the young politician was prevailed upon by the Pulilan Mayor and had forgotten his previous engagement and succumbed to the entreaties of his nagtatampong kaibigan. Reminders of “time to go” were brushed aside, and the two old friends went on with their unscheduled meeting until the wee hours of the morning. Both were too intoxicated to be reminded on the tragedy of the Plaza Miranda mayhem that occurred at around midnight of September 21, 1971.

Whether each one of them or both were establishing an alibi, that Pulilan event was reverberated time and again in stories tracing the length of the relationship between the Aquinos and the Ochoas. Ochoa Sr. swore to high heavens that Ninoy was at his side when grenades were hurled at the makeshift stage in Plaza Miranda nearly demolishing the entire opposition maiming the entire LP senatorial ticket.

Ninoy was forever grateful to the Pulilan Mayor who he claimed saved him from certain harm. All the more the relationship was cemented not just between them but has extended up to the present personalities.

Before the 1971 bombing, when Ninoy was just Concepcion Mayor and later Tarlac Governor, the Pulilan Mayor was a habitué of the Times Street residence bringing along a young boy named Paquito Ochoa Jr. His days at Times were not dreary owing to the company of Benigno Simeon Aquino III. At the Ateneo the now sitting President rejoined his childhood friend when the former took up his Economics course together with a Batangueno, Mory Amorado.

Bridges after bridges were connected.

When the now sitting President ran for congressman in one Tarlac district, his consigliore is the now sitting ES. The congressman right after winning his seat in the Lower House, went on to become a Senator of the Republic and kept still the counsel of his friend, Paquito Jr. Nobody knew the expanse of this protracted bond between the two gentlemen whose commonality is being a namesake of decent fathers. With these two men linked by a trek of a thousand miles behind them, each one has grown all too cozy. Body language and raised eyebrows  shorten a conference. In 2010 when Benigno III was elected President, Paquito Jr was named ES. With his long time pal by his side in Malacanang, the sitting President knows his Presidency is well fortified. “Tiaga lang Padre, mahuhuli din natin yan”, his ES was telling the President referring to the invisible steering wheel of the Presidency.

What the sitting President does not know or may not be privy of is an agenda by the ES disparate from that of the LP. Or is it? Is this the proverbial dictum of divide and conquer?

To the ES, the LP is everything the sitting President is not.

At this stage, the ES is laying the foundation of mutiny from among the ranks of the the LP. Everything the LP or the Hyatt 10 has documented as the blueprint for 2013 and 2016, the ES and his cohorts are all too willing to shoot down.

ES has his own senatorial line up in 2013 who he makes sure are loyal to the President. The same is true in 2016.  He is grooming and continues to groom his own presidential bet 100% compatible with the sitting President: the sitting Vice President and the acknowledged Chairman Emeritus of a new alliance opposite that of the much ballyhooed majority party, LP.

Dry the funds up.

What better way of blindsiding the LP? Punch holes at its source of logistics. As early as the latter part of 2010, the LP leadership has been importuning the President for funds pipeline without denting the public coffers. One Atong Ang suggested the termination of franchises of existing Small Town Lotteries and come up with a micromanaged PCSO Loterya ng Bayan.

By October, 2010 fliers were printed itemizing the qualifications of a franchisee together with unilateral waivers and non-liability clauses meant to immunize the PCSO from lawsuits. Applicants queued for franchises covering old and new territories and paid P50, 000 application fees. Applicants trooped to the Securities and Exchange Commission for incorporation pumping P10M as minimum authorized capital. In its applications, each applicant has to state under oath the average monthly engreso meant to curtail the current practice of understating the monthly gross collections. In one newspaper account it was reported, “(Chairman Margie) Juico said almost all the 34 or so STL operators have applied with the PCSO before the Feb. 15 (2011) deadline to signify their intention to convert to PLB. This could mean that jueteng lords who operate STL as front have also applied for PLB operation. “We welcome anybody,” said Juico, hastening to add that like all other applicants they have to pass an evaluation and follow PCSO rules and regulations. She recalled having said in a congressional hearing on Feb. 16 (2011) that the jueteng lords are like rebel returnees who came down from the mountains and rejoin the folds of the law and went to mainstream society…In the congressional hearing last (February 15, 2011), she said the PCSO welcomed recommendations from legislators to improve PLB and the management was willing to make some changes before submitting the IRR to President for final approval. “We have to submit it to the President because we are under the Office of the President and this is a major policy,” she said.”

For no apparent reason, whenever the agenda is on the approval of the shortlisted applicants, no quorum is achieved by the Board for the last twenty months. Some Board members were getting instructions from the ES or are just afraid to act against the wishes of the President’s most trusted man.

A canard has been floated that the move not to table the shortlist was to embarrass PCSO Chairman Margie Juico whose husband Philip is being accused of receiving access fees in millions of pesos. Since the PCSO is under the Office of the President, some legal minds of the ES have submitted initial reports to their chief that the legal framework of the Loterya ng Bayan shall be voided for being shot with alleged legal infirmities. “Mass termination of existing STLs can not be done by a mere circular,” a Malacanang lawyer was quoted as saying.

With a legal opinion in the works, the PCSO Board is stymied to proceed in the processing of PLB applicants. This has caused dissension from among the ranks of the applicants who have forked in substantial amounts in fees and organizational costs an of course anxiety within the PCSO Board. Some PCSO insiders were quick to counter that the expenses of the applicants are miniscule since most of them were fronts anyway of the traditional leaders (Bong Pineda, Atong Ang and Charing Magbuhos) in the “industry”.

Local LP leaders were assured by the President that they have a major role in the selection of the franchisees in their localities ensuring availability of logistics in the upcoming electoral midterm elections and in anticipation of the 2016 Presidential elections.

With time almost running out, as the Commission on Elections has set the first week of October, 2012 as the period of filing the certificates of candidacy, local LP leaders are now in near panic for being invisible in their areas owing to dearth of funds to move around.

Whereas, VP Binay’s co-chair Erap has upped his ante in Manila by staging practically a coup among the local leaders in the premier city by raiding the Association of Barangay Chairmen and the City Council, winning to his side 80% of its membership. Whether the LP stalwart Mayor Fred Lim is amused or not, he banks on the intelligence of his Manila electorate.

The current impasse between the PCSO Board and the Office of the ES is meant to benefit Vice President Jejomar Binay who has been grooming his own senatorial slate under his United Nationalists Alliance. From all indications, the ES has aligned himself with Binay as insurance for political longevity way beyond 2016.